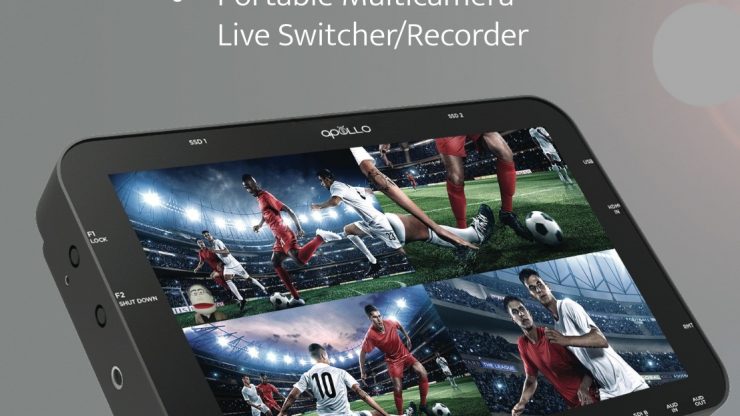 Convergent Design have today launched a product that will be sure to interest anyone who routinely does multi-camera shoots for reality TV or interviews. Apollo is a portable HD multi-camera recorder/switcher. It can simultaneously record up to four HD video signals in ProRes HQ/422/LT, along with a fifth channel which is either a live-switched output of the four signals, or a quad-split reference view. The four-channel live switched recording means you can quickly output a cut, while still having the four isolated HD video signals to fall back on if you want to re-edit later. According to Convergent Design it is the only portable device of its kind that can both record multiple HD camera feeds as well as live-switch.

I spoke to Mitch Gross from Convergent Design about the Apollo and you can hear what he had to say below:

For reality TV shows, live events, and any other project where multiple cameras are being used, the Apollo allows all of your cameras to stay in perfect sync with matching timecode. Four SDI signals, or one HDMI and three SDI signals can be used. If you need to use more than one HDMI camera then you could also use some readily available HDMI-to-SDI converter boxes. A safety function is built in so if one camera’s feed goes down the unit will still keep recording all the other signals.

Many reality shows rely on rigging multiple cameras into tight spaces like the inside of cars. This usually requires a trunk full of separate recorders. The Apollo offers a much more streamlined and cost effective solution. The only possible downside being a reliance on one device for all recording, if the Apollo were to go wrong or run out of power then you would loose all recordings and not just one. It might be a good idea to record to each camera internally as well if the camera is capable of it.

Convergent Design have also catered for productions using even more than four cameras. Multiple Apollos can be daisy chained together. This feature will hopefully be coming in early 2016 and will allow you to cascade and interconnect up to three Apollos to record a whopping twelve HD or six 4K streams.

Apollo features all the same image anaylsis tools and 7.7” OLED panel that came with the Odyssey series. This includes preset or custom monitoring LUTs, false colour, focus assist, histogram, pixel zoom, and spot meter. These tools will be perfect for helping to line up and get different cameras to match as closely as possible. Switching can be done by using the unit’s touch screen or via a remote control pad keyboard that will be available early next year. 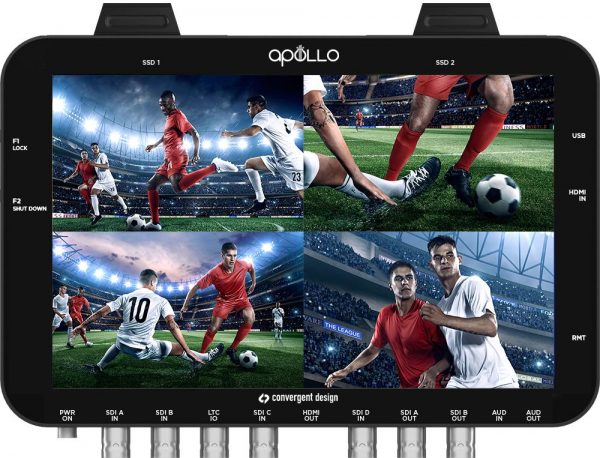 The Apollo’s weight and size is identical to that of the Odyssey 7Q/7Q+. Just like the Odyssey, it can run off a single camcorder battery, or mains power. It features dual 2.5″ SSD slots that allow for twice the record time, or a mirror recording to create a safety backup. A single SSD contains all of the multi-camera media, dramatically reducing turnaround time for post. By using up to 2TB of SSD storage, you can record four HD streams for 3.5 hours in ProRes HQ, or 8.5 hours in ProRes LT.

Once you have finished recording you can use the new Apollo Media Manager App that allows recordings to be exported as separate Apple ProRes files, or as a single multi-camera Quicktime file that drops directly into the timeline of supporting NLEs such as Final Cut Pro X. This saves a lot of time in post and there is no need to create a multi-camera sequence, transcode or sync up different cameras.

For those owners of the 7Q/7Q+ recorders who are wondering what happened to the promised quad recording option? Apollo is it. In an interesting move the Apollo functionality will also be available to owners of the 7Q/7Q+ as a paid upgrade. From the outset Convergent Design told users quad recording was going to be a paid option and so this comes as little surprise. Although the price is not insignificant for what is essentially a firmware upgrade the company have added extra features such as the fifth screen recording, which is more that was originally promised. Indeed I think it’s great to see the 7Q and 7Q+ feature set being enhanced this way, rather than forcing you to buy a whole new device.

According to Convergent Design a firmware update around the time of Apollo’s release that will add the Apollo option to the Odyssey7Q and Odyssey7Q+. Without purchasing the license it will only run in a demo mode with a big blue bar through all the images. You will however be able to see how the system functions before you decide to buy. The purchasing process is the same as with the Odyssey RAW option. You make the purchase through the company’s website and then receive an activation code to unlock the Apollo option, removing the blue bars. As with the RAW option you can also rent it for a period of time instead of buying it. Purchase price is $1795 US and rental price is $149/day.

The Apollo will continue to be upgraded and advanced through firmware updates. Early next year DNxHD recording is planned along with the dual 4K/UHD recording option. Other planned functions are the ability to record a XML file Edit Decision List from Live Switch, a remote keyboard control pad, audio delay function and on screen source naming.

The Apollo will be available sometime in December and will retail for $3995 US. So far it looks to be a great solution for productions that need to record multiple cameras while keeping a small footprint. For existing 7Q/7Q+ owners, renting or buying the Apollo functionality will turn your Odyssey into an even more powerful production tool.

For more information head over to Convergent Design.