I spent the best part of this morning lining up outside a London Apple store waiting to collect my shiny new iPhone 6S. I had wanted the larger 6S Plus for its optical image stabilisation, but there were none to be found anywhere within about 200 miles.

I’d seen a number of tests over the past few days where people had tried to compare the new iPhone against other 4K cameras. I’m not really concerned about whether the iPhone is ‘better or worse’ than my Sony a7R II; what matters is how usable the footage looks and whether I could cut it in with other cameras if necessary. The trouble is that most testers hadn’t tried to optimise the iPhone image or grade it in any way. So having finally got my hands on the phone – and given it a quick charge – I set out to see what it was really capable of.

If you have spent any time seriously trying to use earlier iPhones for professional work then you’ll be aware of the FiLMiC Pro app. It has been the app of choice for indie filmmakers and video journalists for some time and was used to shoot the movie Tangerine.

The app allows you to shoot 4K at bitrates of up to 150 Mbps with the iPhone 6S and this is what I was keen to try out. It can also shoot at 24P and 25P, unlike the standard camera app which is 30P. It also gives a lot more control over the camera functions and you can lock exposure and focus separately. One thing you have to watch out for is the large files that will rapidly fill up your iPhone. If you are doing this I would recommend the 128GB model that I bought.

In the field the app didn’t perform as expected. It is buggy and prone to becoming unresponsive. There were a number of times that it froze or refused to record. Exposure and focus adjustments were also laggy. Despite this I managed to shoot several shots that worked. I really hope that these bugs will be ironed out soon. As it stands I can’t recommend the current version of FiLMiC and I’m looking at alternatives.

For this first test I wanted to see how the iPhone performed ‘naked’. No rigs, microphones, tripods, add-on lenses or filters. Just the phone and a case. To get an even more film like result you should really look at using neutral density (ND) filter, tripods and other stabilisation devices. The next stage of my testing will involve all of these.

Handheld shots did suffer from the jitters and I would really like to test the optical image stabilisation of the iPhone 6S Plus to see if it improves things. Handheld on the regular 6S really does need some kind of additional stabilising device or some very careful technique. A couple of the shots in the edit here have had warp stabiliser applied to smooth out excess shakiness.

Despite these issues I was really impressed with the results. In good light the images were detailed, clean and mostly free of moire and aliasing. The increased 150 Mbps bitrate of FiLMiC pro really helps to get the most out of the sensor and lens. The images could easily pass as being from a 4K prosumer camcorder. There was of course no shallow depth of field, but that is to be expected. Motion was not smooth due to the lack of a ND filter but I hope to be able to sort that out in the coming days. The lack of any Log or film-like gamma does put the iPhone at a disadvantage when trying to hold onto highlight detail, this is evident in a couple of the shots. (EDIT – The Youtube 4K version of the video has a lot of compression. You can download a higher quality version from Vimeo if you are logged in as a member).

I brought the footage into Adobe Premiere and gave it really quick grade using FilmConvert. I used the KD5207 Vis3 LUT and added a little grain to enhance the film effect. To my eyes the results are pretty impressive and apart from the motion could actually pass as being shot on a more conventional camera. 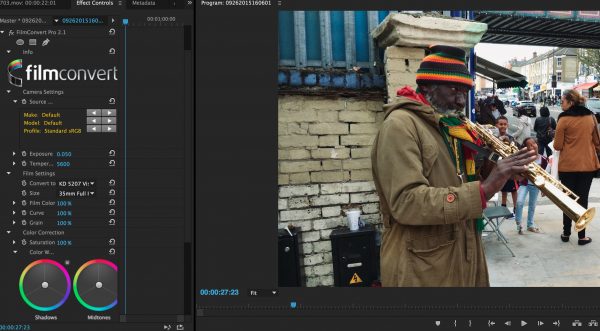 The sound recording quality was another surprise. The street musician was recording using the internal mic of the iPhone and the result is reasonably good. Of course I expect it to be much better with a dedicated shotgun or lavaliere mic like the ones from Rode.

I need to do more tests but already I can already see the iPhone 6S being more than good enough for some doc work, POV shots, video journalism and especially discreet shooting. We just need an app that is stable enough to use.

If this camera was a professional model for the price of an a7R II, then clearly it wouldn’t be a competitor in the image or handling stakes. What I think is far more significant is that a phone designed for the masses has image quality this good. What the iPhone can now shoot is nothing short of amazing. The fact that Joe public has access to it is in equal parts exciting and scary.

So have we finally got to the age of #4kforall ? I think so.