Walking around on the show floor at IBC I saw a man throwing batteries down onto the hard floor, so naturally I had to go and investigate. What I stumbled across were a series of heavy duty Li-ion camera batteries made by SWIT. They are available in both Gold mount and V-mount. A earlier version of the batteries was shown at NAB earlier this year, but at IBC they were displaying their latest version 3.0.

The batteries are encased in a dual housing that makes them not only IP66 water proof, but also drop proof from up to 2 metres. The batteries come in a range of capacities including 83Wh, 160Wh, and a massive 250Wh. 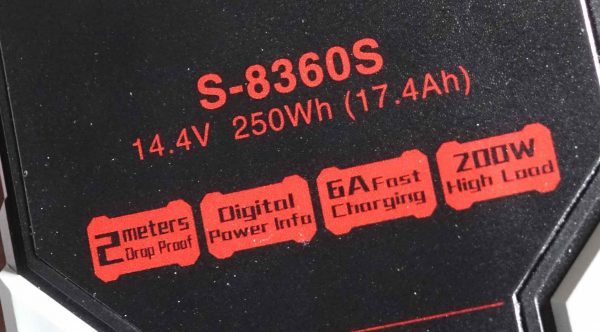 The 160 and 250Wh versions feature a digital power info display and high load capacity for powering devices that require a lot of amps. The 250Wh battery can substain a 16A load output. These batteries are perfect for powering heavy load cameras like the Arri Alexa and Sony F65, as well as larger lights. On Sony cameras the batteries will even display the percentage of run time still left on the battery.

There is no indication yet on pricing or availability. For more details keep an eye on the Swit website.