It has long been the dream of shooters to simply walk with their cameras and film silky smooth footage, without the need for a Steadicam or brushless gimbal. This week that is finally becoming a reality with the launch of SteadXP’s Kickstarter campaign. The revolutionary system is a combined hardware and software-based image stabilisation system that comprises a camera top sensor box and some very clever computing to construct smooth sequences out of shaky footage. There are two versions; one for video cameras and DSLRs, and the other for GoPros.

We’ve featured SteadXP several times here on Newsshooter but it has taken a long time to perfect. I had begun to think it might be vapourware. Then I got a message from SteadXP’s  Adrien Farrugia asking us if we would like to try out a beta version. Of course I said yes immediately and several days later a little blue box was sitting on top of my Sony a7R II all ready to film.

The blue box is what sets SteadXP apart from other software-only stabilisation systems, Because the stabilising software knows where the camera is in 3D space it takes the guesswork out of its calculations. The box sits on the camera’s hotshoe constantly gathering data about its movements and recording them. It runs on regular GoPro batteries and has a microSD card slot on one side. On the box are a RCA connector, a 3.5mm mini-jack and a small LED that flashes to give the status.

Having the data alone would be useless if it could not be accurately tied to the footage being recorded in the camera, and that is where the RCA and mini-jack connectors come in. A video signal is fed from the camera into the SteadXP and used to sync the two. Information is then encoded and sent out of the SteadXP via the mini-jack to be recorded on the camera’s audio tracks. 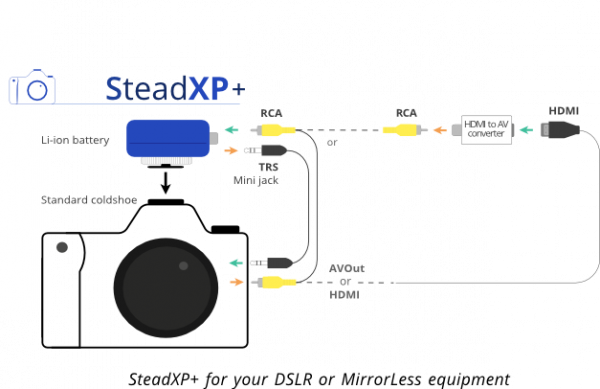 In the case of cameras without a RCA connector you currently need to add a convertor box that takes your HDMI or SDI signal and converts it, before feeding into the SteadXP. On the a7R II I used a small HDMI convertor that didn’t require any power and weighed virtually nothing. (I did experience a hiccup when I realised that if you record 4K on the a7R II and send out HD on the HDMI, then the LCD and EVF don’t display the image any longer; hopefully there will be a workaround for this in the future. For these shots I actually had to fly blind). 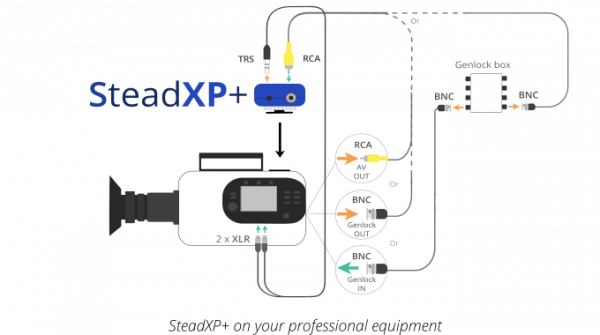 Once you have this all set up you need to calibrate the processing software so it can make sense of the data from your camera. This requires you to take pictures of a test chart from different angles, and shoot a clip that determines the camera’s rolling shutter. This information is critical to SteadXP’s ability to work. You need to do this for each combination of lens and camera. Change of zoom or focus also affects the calibration and ideally you should keep your camera set exactly the same for a specific calibration. Adrien recommended to calibrate at the centre of the focus range, provided that your lens doesn’t breathe too much.

Any change in the optical set up, even a filter change, will likely require a quick recalibration. This can be annoying at first, but once you get your favourite set ups identified then it becomes easier. SteadXP will also publish an online database of common lens and camera combinations in the future.

SteadXP takes the information gathered and uses it to remove geometrical deformation, remove rolling shutter and calculate a smooth trajectory – basically making up some frames. Some very clever math is involved. This is all done on a computer after shooting. During processing you can let the computer determine the best trajectory, or choose it yourself.

One thing you will notice is that the image has to be cropped quite significantly and you need to allow for this when shooting.

For my set up I used a7R II with a Canon fit Tokina 11-16mm Cine lens and Metabones EF adapter. I locked focus and taped the zoom at its widest 11mm setting. I set the camera in 4K 25P and S-log 2. Then off I went.

I tried to move the camera as smoothly as possible, as though I was actually using an invisible brushless gimbal. This must have made me look incredibly silly to people passing by, but it was liberating nonetheless. Adrien had advised me that to get good results you need to use a higher shutter speed with SteadXP. I opted for to switch between 1/250th and 1/500th speeds with the lens at about f4, using the ISO to control exposure. You can use lower shutter speeds but the results aren’t so impressive. The lowest recommended shutter speed is 1/125th with a bigger camera like the FS7 that has some inertia.

This is one of the main limitations of the system. It may improve as the software develops, but for now I would keep shutter speeds higher. This of course rules out SteadXP for some uses – high-end dramas and movies had better stick with Steadicam or gimbals for now. Shooting in ambient light at night might also be troublesome with artificial lights. If you are shooting for broadcast news or even documentaries I think you can probably get away with the occasional use of higher shutter speeds, especially if you are only using short three or four second clips. For shots in a breaking news event, establishing shots, shots where you are following a subject, or walking pieces to camera, I think I would accept the trade-off if the alternative is wobbly handheld at 1/50th of a second. Most viewers are already used to seeing GoPro shots at high shutter speed on a regular basis and probably wouldn’t notice the SteadXP high shutter either.

SteadXP also loses some resolution when applied. This is thanks to the cropping and processing. For that reason, it makes sense to start with as high a resolution as possible. At present the algorithm used has a lower quality interpolation scheme, but SteadXP say this will be improved before release. My 4K footage had a final output in 1080 HD and still looked a little soft in parts. In the future I imagine that 6K or 8K video will give a much better results.

The stabilisation software is currently under development so I had to send my footage to Adrien for stabilisation. In the final product there will be software for you to do all this yourself. Adrien tells me that it currently processes at around 2 fps for 4K, and 8 fps for 1080 on a fairly standard PC. This is much faster than any software only solution.

After a few hours of waiting Adrien sent back the finished footage. When the first clips came back, all I thought was: Wow! The system managed to take my wobbly footage and almost completely smooth it out. It really does work and it is something you really do have to try for yourself.

Of course, it isn’t as good as a clip shot from a MoVI or Letus Helix, but they cost a whole lot more and are nowhere near as discreet. The effect isn’t completely natural – it still looks like it has been processed electronically – but I would happily use the odd three-second clip in a larger edit for a TV show.

SteadXP does a better job of reducing high frequency vibration, but one thing you do notice in the footage is that if there are things in the foreground and you are bobbing up and down as you walk, then SteadXP can’t fix the apparent bumpiness. That’s because it’s caused by changes in parallax as the camera bobs up and down.

SteadXP works best when there is no foreground, or when the camera is moving more smoothly. If I were to try some of these shots again I might be tempted to use a skateboard, roller skates, or even a shopping trolley.

Because SteadXP uses both audio channels for its recordings you will lose any sound recorded unless you have a professional video camera with four channel recording. With a two channel system the only way around this is to unplug the mini-jack cable a few seconds after you start rolling and use your camera mic – not ideal. That said, for the kind of shots I would do with SteadXP, it isn’t really a problem.

Another use that I can see for SteadXP is as a failsafe system for aerial, Steadicam and gimbal operators. For shots that can’t be repeated during live events a SteadXP could be rigged up all the time to the camera. If a shot gets accidentally wobbled then SteadXP could be used to salvage it.

SteadXP can also be used more creatively to get shots that can’t be done any other way. Even the smallest gimbal or Steadicam is 30 or 40cm tall, but with SteadXP you can put the camera into the smallest gaps and film away. Hyperlapses too become much easier to achieve; there is a good example in the Kickstarter video above.

SteadXP isn’t without its limitations, but once I had those worked out I was happy that it is still a really useful tool. I could certainly see myself using it on a regular basis. For the real world shooter it is a Get Out Of Jail card in all sorts of situations. Adrien and his team clearly have more work to do to make SteadXP perfect, but I for one am happy to fund the Kickstarter to make it happen.

As with all Kickstarters, please remember that funding a project does not guarantee its success. Things can go wrong in the development and production. Early backers of SteadXP have the potential to get a unit for as low as 110 Euros.

You can find out more on the Kickstarter campaign site.