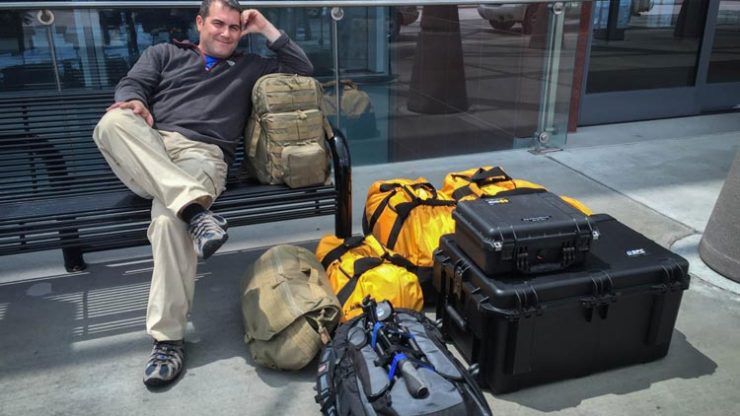 It’s hard to believe that nearly five years have passed since I made my first expedition to the Chernobyl Nuclear Exclusion Zone (Zone of Alienation). As I look back at the countless trips and well over 1,000 lbs of gear I’ve carried into the Zone, it seems representative of how production technology has changed over that short period.

My very first trip in 2011, I carried a Canon 5D Mark II, several lenses, a Manfrotto aluminum tripod and a small Panasonic TM-700 HD camcorder. The idea of a 4K prosumer camera was all but a dream at that point as the Sony F65 hadn’t even been released. I was mostly focused on still images, but had been editing and producing small video projects as a hobby.

On my most recent expedition in June 2015 I took a Sony FS7, Panasonic GH4, Convergent Design Odyssey 7Q+, Various EF and Micro 4/3 lenses, DJI Ronin-M stabilizer, Ikan Corp E-Image Carbon Fiber Tripod, and DJI Inspire 1 and Phantom 3 UAVs (both capable of shooting in 4K). The one downside of 4K is the near-quadrupling of storage required. I elected not to shoot 4K RAW on this trip due to its huge storage requirement (28TB of drives on expedition 4) and yet I still took 12TB of drives with me. A far cry from the single 500GB drive I took on my first trip.

So what have I learned over the years of ‘field testing?’ First and foremost, do try and test equipment before you actually leave for an expedition. Field trials are one thing, but never actually using a piece of equipment prior to arriving at the site of the world’s worst nuclear accident is quite different. I did read the manuals on the flight over to the Ukraine so there was at least academic familiarity with the equipment. Though I must admit that over the years manufacturers have gotten a bit better at writing their manuals and simplifying the human-machine interfaces.

Over this period of exploration, the technology of Unmanned Aerial Vehicles (drones) has changed dramatically. From my first drone (DJI S-800 with a Naza Flight controller) to my current DJI inspire, the change in capability and its impact on storytelling is quite amazing. My very first drone had a gimbal that utilized standard RC servo motors which had little ability to keep my Panasonic GH3 stable. Post-production took hours to stabilize the footage. My current DJI Inspire 1 has a gimbal driven by brushless motors that can react upwards of 300 degrees per second and a camera that shoots in 4K LOG. I even own a xFold (www.xfoldrig.com) which can carry my Sony FS7 for flight times of more than 15 minutes.

Having made the transition from HD to 4K over a relatively short period, I’ve learned that although resolution is important, bit depth and color sampling is far more important. We hear the terms 4:2:2, 4:2:0 and 10 bit vs 8 bit a lot, but I think many individuals don’t really understand the importance of bit depth and color sampling. I would suggest that everyone should learn as much as they can about the topic prior to embarking on a new project.

So what’s next? One thing I’ve also learned when embarking on an undertaking as large as this is you need a great team to make a great documentary. At NAB this past April I met producer Paul Christopher Greene (Flight AV Productions). The two of us hit it off immediately, and began discussions about a cohesive voice for the body of work I have amassed over five years. It was through this connection that the documentary Half-Lives: Love and Energy in the Nuclear Age was born. Greene will direct the production which, with the assistance of the Flight AV production team, will tell an amazing story.

Half Lives: Love and Energy in the Nuclear Age tells the interwoven love stories of my courtship and wedding to Elizabeth (in Chernobyl), of the people who refused to abandon their homes in this damaged but hauntingly beautiful area, and of mankind’s ever-expanding love affair with energy. We have enlisted the help of Cambridge alumna Dr. Eugenia Cheng (author of the charming, informative book ‘How to Bake Pi: An Edible Exploration of the Mathematics of Mathematics’) to help narrate the story. Half-Lives will take a scientific, objective look at our energy options using concise, up-to-date analysis and variables unique to each part of the world. Half-Lives explains the statistics and math behind the science, and examines the genuine risks, benefits, and potential consequences of the choices we make in our ever-increasing appetite for energy.

Sometimes when you think you’ve finished a project or you have a concept for a project and you spend a lot of time and energy on that project, you miss what your project is really about. Perhaps the most important thing I’ve learned is that you shouldn’t be afraid to deviate from your plan, whether it be in the tools you’re using (in my case, admittedly, a ridiculous number of tools), or the story you’re telling with them.

He is also an independent film maker and cinematographer based in Denver, Colorado and has been working on a five-year personal project documenting the Chernobyl Nuclear Exclusion Zone. Philip is a self-professed geek when it comes to film production equipment and has been involved in the art and science of film-making for over 20 years.

Philip will be at IBC 2015 and available to interview about his experiences filming in Chernobyl and the documentary he’s making with the footage. If you’re interested you should contact him by email at [email protected]