Aputure have shown a new version of their DEC lens adapter called the DEC Pro. The original DEC allowed you to remotely control focus and change the iris when using Canon EF or EF-S Autofocus lenses. The DEC adapter itself enabled you to use these lenses on a Micro Four Thirds or Sony E-Mount camera. This was a clever solution as the camera itself can’t communicate with the Canon lenses. To overcome this, an included wireless remote allows you to change iris (aperture) and drive focus from up to 328 ft away.

The DEC Pro is a similar lens adapter that has the added advantage of being a focal reducer or “speed booster” that offers a 0.7x wider field of view and gives you an extra stop of light. The DEC Pro version is likely to be of interest to users of cameras such as the Panasonic GH4, Blackmagic Pocket Cinema Camera, Sony A7R II and JVC GY-LS300. The adapter body itself is now two parts and not one. The optics and lens adapter can be detached from the wireless control for easier storage. The shape also means that it will fit more easily onto smaller brushless gimbal setups. 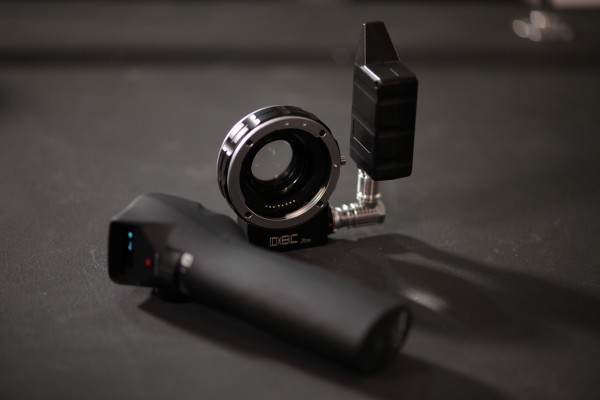 The remote control handgrip looks similar to the original version and can be mounted to gimbals or shoulder rigs in place of a regular handgrip. It has a display that indicates the status of the lens.

The DEC Pro kit, which consists of the adapter, controller and wireless remote is expected to be on sale very soon.