If you think 4K is a fad then think again, especially if you live in Asia. Today, NHK will use six cameras at Yankee Stadium to record the first-ever baseball game captured in staggering 8K resolution. The cameras being used will be the Ikegami SHK-810 8K. The SHK-810 is the world’s first hand-held 8K ultra HD camera system and employs a single 33 million-pixel Super 35 CMOS sensor. While the game will not be broadcast, Major League Baseball and NHK will have the media view the game on 8K monitors in Yankee Stadium during the game. The recording of the Yankees game follows the successful use of the Ikegami 8K cameras at the FIFA Women’s World Cup Canada 2015 just a few weeks ago.

Also this week broadcaster FujiTV became the first commercial broadcaster to start streaming 4K UHD in Japan. FujiTv has started streaming 4K shows through Tokyo based Mist Technologies, which uses a peer-to-peer content delivery network platform called MistCDN, that according to the company, claims to offer an 80 percent saving in bandwidth. Mist Technologies are using this peer-to-peer system to reduce traffic passing through the server by sharing the content between the browser, they can significantly reduce infrastructure costs. FujiTV streaming subscribers will see bitrates of up to 40Mb/s. To put that figure in perspective, that’s around 2.5x times faster than the 15.6Mb/s 4K streaming available from Netflix and 5x faster than YouTube.

For this peer-to-peer system to achieve maximum efficiency, MistCDN needs users to be watching the same things at the same time, in a similar way to how Bit Torrent systems work. While FujiTV’s 4K programs are expected to draw in viewers, the initial uptake could be slow. Unlike the US, Japan has been very slow to adopt online streaming despite its fast internet speeds. Most viewers still prefer to watch terrestrial television broadcasts instead of cable or streaming services.

FujiTV has already shown a documentary on Hashima, the deserted island that is probably best known for it’s role in the James Bond film Skyfall. This month, 4K content including some Japanese J-league (football) games will be broadcast. In August FujiTV will live stream the 97th Japanese High School Baseball Finals in full 4K. To watch 4K in Japan you still currently need a third party tuner box to decode the signal as well as a 4K capable TV. One of the key benefits of 4K UHD broadcast is that it is done in the new REC.2020 colour space (that claims 12-14 stops of latitude) , this allows a lot more dynamic range to be shown that the current Rec.709 standard (which has 7-9 stops). What is also interesting is that REC.2020 is only compliant with progressive scanning and not interlaced. This is a key reason why broadcasters want the 4K UHD standard to be 50 or 60P.

Despite the relative infancy of 4K, Japanese broadcaster NHK has gone a stage further and been conducting 8K production tests in preparation for their proposed coverage of the 2020 Tokyo Olympics. NHK filmed this year’s Wimbledon tennis matches using a Super Hi-Vision 8K resolution system. 8K (7680×43200) is 16x the resolution of full HD and 4x the resolution of 4K. NHK were using two 8K Ikegami SHV8000 Super Hi-Vision cameras, a FOR-A FT-1 with an astrodesign up converter and a Sony F65 that was having its 4K signal up converted to 8K through the use of specially designed Sony processing software. 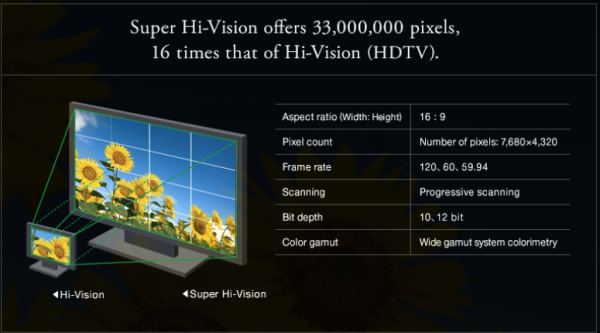 As if 8K wasn’t enough, Korean electronics giant Samsung have partnered with the South Korean government to develop a 11K resolution platform. Code named EnDK, the project aims to have a prototype 11K display (11,264 х 6,336) completed by the end of 2018. The resolution from the high number of pixels on a 11K display is claimed to produce an optical illusion that gives viewers an almost life-like depth of field. You could also potentially watch 3D material without any 3D glasses, goggles or headsets. Samsung not only wants to use the 11K technology for displays, but they also want to integrate it into mobile devices such as phones and tablets. 11K resolution would provide more than 2000 pixels per square inch on an iPhone sized screen. To put this is perspective, a iPhone 6 Plus currently has 401 pixels per square inch. When launching the iPhone 4 In 2014, Apple’s Steve Jobs stated that the number of pixels needed for a Retina Display is about 326 PPI for a device held 10 to 12 inches from the eye. If you squeezed more than 2000 pixels per square inch into the current iPhone 6 Plus you wouldn’t be able to see any individual pixels no matter how close you held the display to your eye.

Japan’s Roadmap for 4K and 8K:

2018
Practical broadcasting the start of the 4K and 8K in BS, etc. (starting as early as possible in 2018)
Held year of the Tokyo Olympics and Paralympic
2020

Aspiration of 2020
– A number of relay of the Tokyo Olympic and Paralympic has been broadcast in 4K · 8K. In addition, the public viewing in all over the country, excitement of Tokyo Olympic and Paralympic is shared across the country, not only the venue.
· 4K · 8K broadcasting have spread, a lot of viewers are enjoying the 4K · 8K program with commercial television.