Handheld brushless gimbals have become incredibly popular for smaller cameras such as the Sony a7S, Panasonic GH4 and Canon 5D mkIII. They offer an affordable, compact solution for camera operators who want to get some extra creative movement into their shots. Japanese company Dream Art Japan have come up with an interesting 3-axis brushless stabilizer called the S-Monster. It is being marketed as a gimbal that can be transformed easily from a pistol grip configuration into a traditional two hand gimbal setup.

At first glance the design, when used in pistol grip mode, bears a resemblance to the popular Nebula 4000 Lite. The camera needs to be correctly balanced on the gimbal and it appears that the S-Monster needs tools for this adjustment – something that the Nebula also needs. 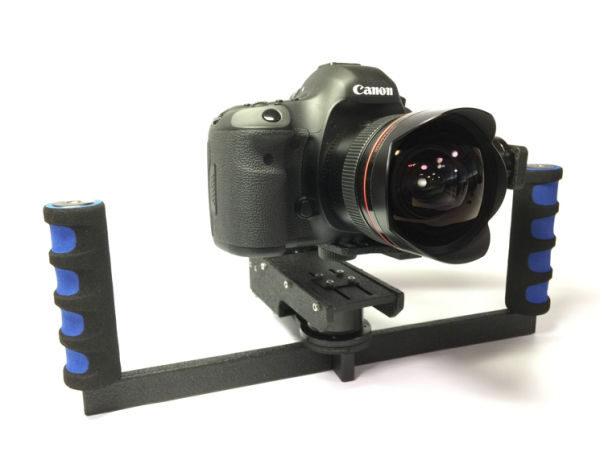 Like the Nebula, and most other gimbals, the performance of the pitch, roll motor and yaw motors can all be adjusted independently via software. Where the S-Monster differs to the Nebular 4000 Lite is in its weight capacity. The Nebula can only take camera payloads up to 1kg, while the S-Monster can take larger camera and lens packages up to 3.2kg. This means that a 5D mkIII or similar sized DSLR can be carried and I imagine the S-Monster’s motors are more powerful as a result. That said, I would be concerned about trying to carry a 3kg camera and lens set up in pistol grip configuration for any great length of time.

It should be noted that the Nebula 4000 Lite can also be easily converted into a traditional two handle gimbal setup using inexpensive third party accessories. For a lot less money DP Jason Wingrove converted his Nebula 4000 Lite with some Redrock Micro handles to achieve a more customisable set up where an Atomos Shogun recorder could be attached. You can see examples of how the modified Nebula performed here.

The S-Monster uses an interchangable 850mAh battery that can be swapped in and out. The S-Monster also allows you to mount monitors such as the SmallHD 502 in several locations depending on the set up you are using.

The S-Monster will inevitably be compared to the cheaper Nebula 4000 Lite, which is the current benchmark when it comes to compact, low cost, entry level gimbals. At around $1100 US for the S-Monster gimbal with the two different handling solutions, the price is almost double that of the Nebula 4000 Lite which is currently available in limited numbers for $599 US. The S-Monster is almost the same price as the more conventional shaped DJI Ronin-M which can carry similar loads, but has tool less adjustment and a refined tuning system.

For more information you can head over to Dream Art Japan.