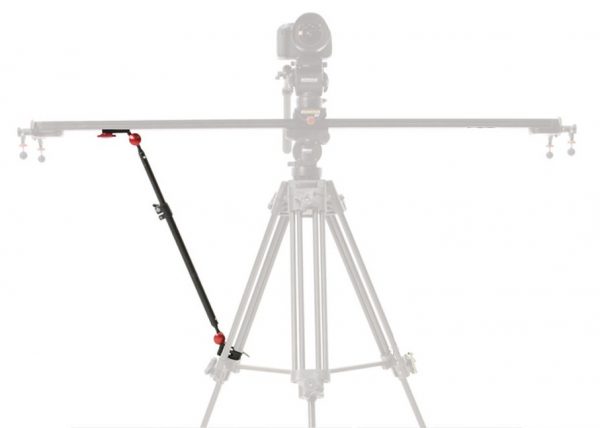 If you have been using a longer slider with your DSLR or video camera then you are probably familiar with the problem: when you support a slider on a single tripod, it will flex and the camera will dip slightly as its weight shifts to either end. Traditionally the only way to solve this is to add a second tripod, monopod or light stand to make the setup more rigid.

Korean firm Konova have now launched an innovative alternative solution. Designed for lighter weight sliders, their new tripod stability arm is essentially a brace that extends from near the end of the slider down to your tripod, where it clamps onto one of the legs. Depending on how long your slider is you can attach one or two of the tripod stability arms, creating extra points of support besides your tripod head.

The tripod stability arm is designed for Konova’s own range of sliders, but I am told that it should also work with other popular brands that have the appropriate 1/4″ 20 screw holes at their ends.

The company also had a new flywheel system at NAB that is designed to make slides much smoother and easier. Based on a design by a blogger called Nitsan Simantov, it can be fitted to a Konova slider and adds momentum to the movement of the slider carriage. You can see how it works in the video above: