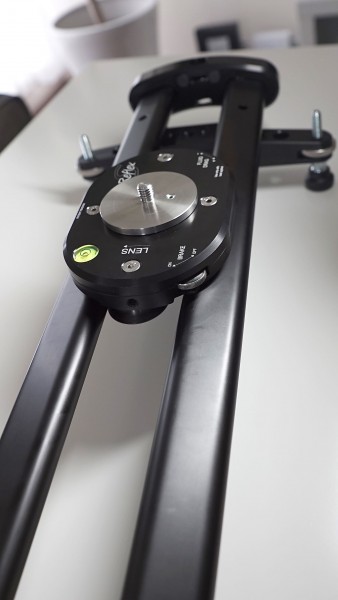 Ever since I started using larger cinema style cameras I have moved away from using a slider as part of my kit. I did buy a Redrock Micro One Man Crew for parabolic, motorised shots to use on interviews but I can’t do normal slider shots with that device. Recently I shot a documentary in Sri Lanka using smaller cameras and was in the market for a more conventional slider. I came across a new fluid drag slider system called the SmartSLIDER Reflex from Italian company SmartSystem. If your not familiar with fluid drag systems, they are usually found in professional tripod heads. A fluid head literally uses fluid, i.e. viscous oil between the mechanical components that allow the smoothest movement. A quality fluid head will allow for the subtlest of movement with clean starts and stops, as well as jerk-free pans. 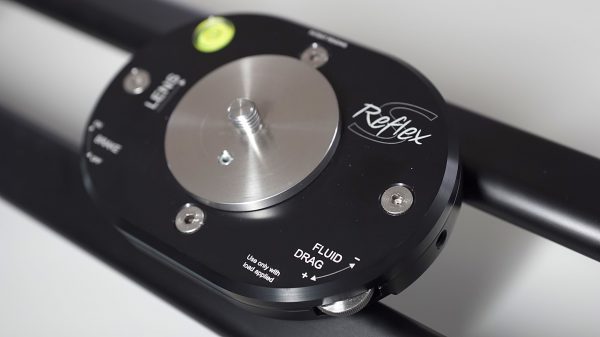 Smart System have taken the same principles of a fluid drag system and applied them to a slider. Like a true fluid head, the Reflex S operates directly on the ball bearings rather than using simple friction against the rails like most other slider systems. By adjusting the drag to the payload applied on the slider it’s possible to make regular and smooth starts and stops that will not be affected from any vibration. It is made using special high-speed ball bearings fixed on wheels turned from a special high resistance plastic material. These wheels then roll on anodized and rectified aluminum bars. 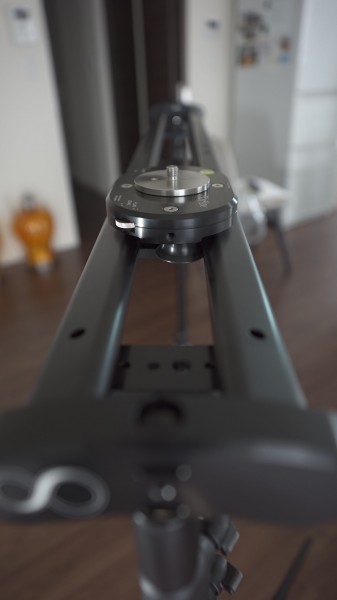 The fluid drag system wasn’t the only thing that led me to purchase the Reflex, it is also incredibly light and can carry a substantial payload. I chose the 800 version which has 800 mm of stroke and weighs just 2.2kg. There are two shorter versions available, but my thoughts are if your going to use a slider it really needs to have a fair amount of travel to make it worth using.

When it arrived the first thing I noticed was the build quality. They really have done a fantastic job manufacturing the slider. Everything is nicely finished and the quality of the materials used is excellent. The second thing that struck me was just how light it was. Keeping light is always key for me especially when I travel. The 800 version won’t fit in a suitcase but I usually travel with a long bag that I put light stands etc. in, so that is not a major concern for me.

The SmartSLIDER comes with two 5/8” holes placed on the sides to let you fix the slider to a common light stand. This is very convenient as the 800 version is too long to support by just mounting it on a single tripod. I bought a Manfrotto video head to mount on the slider that can take a wide variety of cameras. SmartSystem claims they have tested the slider with payloads up to 14kg and based on my experience I think you could do that but it would really depend on the video head you mounted to the slider.

All those features are great but the most important thing with any slider is how smooth is it to use. The SmartSLIDER didn’t dissapoint. The fluid drag system really works well and it feels super smooth to use. Being able to dial in just the right amount of drag allows you to achieve the right speed for whatever shot you are doing. At no stage does the slider feel like it will gather too much momentum and the speed of your move will change. My only criticism is that it does take a bit of time fiddling with the drag control to get the right amount of drag. I guess this is a trade off for having the ability to make such finite adjustment. The fluid drag system makes a huge difference to just how smooth you can make a mechanical slider. It is good to see a company thinking outside of the box and coming up with a design that is not only practical but that actually provides excellent results.

Using the slider out in the field was a real pleasure. Having the ability to put it on light stands or directly on the ground offered me a lot of flexibility. By adjusting the drag control I was able to achieve consistent shots at the speed I wanted. I got smooth results no matter how I used the slider even when using it with longer focal length lenses. It is quick to set up and coupled with its light weight and load capacity it ticked all the boxes for what I look for in a slider.

Second opinion:
Fellow Newsshooter contributor Slavik Boyechko bought the SmartSLIDER 410 and this is what he had to say: “I’d like to say, the 410 slider is the lightest, best slider for travel today. It weighs almost nothing, and at the maximum friction, I can do super slow, zoomed in slides at one pass, consistently. Essentially, I’m in love with this slider. My only negative is that I put a quick release plate on top and bottom of the slider (to make it so it’s easy to slip in between the tripod and camera), and even with a very flat Manfrotto 394 plate on the bottom, it sticks out enough that the ends of the slider can’t lay straight on a table. So, I wish the ends were slightly lower and didn’t require the outrigger feet.”

Below is a video Slavik shot using the 410 SmartSLIDER. “So knowing the slider is top notch for normal conditions, I wanted to give the slider a more ridiculous challenge. I took it to Beluga Point outside of Anchorage, Alaska, where the winds were between 30-50mph. To boot, I put it on a tiny Gitzo 1542T travel tripod (it weighs 2 pounds), with a Canon C100 / Tokina 11-16mm on top. There were also additional quick release plates between the tripod and the slider, and between the slider and the camera, which accounts for some of the flex on the far ends. What happened? My knit hat flew off and the tripod could barely hold still. It was hard to breathe in that kind of wind, let alone shoot. The wind was resisting against my every attempt to slide. So considering what the Smartslider was up against, I’m amazed I got anything usable.”

Smartslider Reflex 410 test in the worst possible conditions from Video Dads on Vimeo.

Advanced motion control is also possible. This from SmartSystem:
Would you like to take advantage of the smoothness and precision of an advanced motion control? Now you can thaks to the application of industrial tecnologies inside the DigiDRIVE Basic. When connected to every DigiMOTOR (PRO, Reflex or 3), DigiDRIVE Basic can guarantee a positioning precision in the order of centimillimeters (tested on every SmartSystem’s slider), that guarantees absolute repeatibility of every kind of movement, also in timelapse.

For more information on all the features and available optional items you can go to the SmartSystem website.

If your in the market for a slider then the SmartSLIDER Reflex system really is worth having a look at. While it doesn’t have the ability to do parabolic moves or very advanced multi axis time-lapse like some of the products from Kessler it will certainly meet the needs of many shooters. The SmartSLIDER is available in 3 different sizes and the smallest 410 version starts at 499 Euros ($544 US).