On the Teradek live show at NAB last week, I caught up with Rolo Wenlock, CEO of Wipster. We discussed his new online collabaration and sharing platform. He told me it is designed to be a simple to use digital media review and approval platform for content creators, media teams and anyone creating short-form video projects. 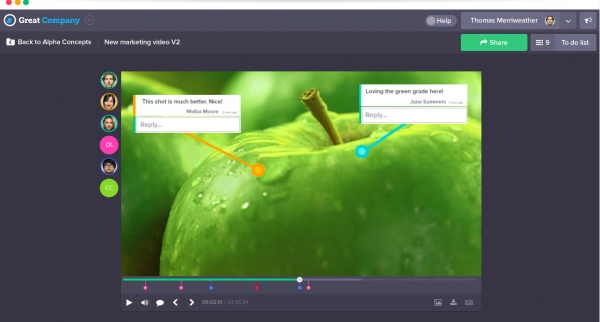 The concept behind Wipster is simple: Upload content, share that content, invite people to review it, get their feedback and make it all available within one application. The user interface looks as simple to use as Facebook and according to Wenlock it has been designed this way on purpose. Clients may not always be tech savvy and they need an application that is straightforward and user friendly, otherwise they won’t use it.

Finally, video review and approval that actually works. from Wipster on Vimeo.

This from Wipster:
In 2011, 51 percent of all internet traffic was video. By 2016 that is set to be 86 percent. There’s never been a more exciting time to be in the business. We’re seeing more people creating more video than ever before. Wipster was born with the idea that the rise and rise of video means something. It’s more than just numbers. The ground underneath us is shifting. The tools of creativity are easier to use than they’ve ever been, and the tools of distribution are even easier.

The power is in the hands of those that have never had it. Video is not the preserve of the pro. The rarified gentleman in tweed trousers brandishing a megaphone is out of a job. Video is for everyone. This is a wonderful thing. We believe in video makers, and it’s our mission to make sure there’s as little between them and getting things done as possible. That’s why Wipster exists.

The pricing structure is as follows:

For more information head over to the Wipster website.