3D Robotics were showing their new Solo Smart Drone at NAB. The Solo is an all-in-one personal drone designed with ease of use in mind. There is a computer-assisted Smart Shot flight feature which they claim allows even novice pilots to get cinematic results from day one.

As industry leader DJI moves increasingly towards using and building their own cameras, 3D Robotics have chosen to focus on GoPro integration instead. With the additional Solo GoPro gimbal the system offers unfettered in-flight access to the GoPro’s controls, as well as wireless HD streaming straight to mobile devices. The signal can also be output to HDMI for live transmission or use with goggles.

According to 3D Robotics the craft uses two Linux computers to offer computing power that is unmatched by rivals. One computer is on the quad itself and the other is in the controller. Watch the video above to get the full story.

Solo will start from $999 and will launch in over 400 Best Buy stores across the US, with in-store availability on May 31st.

When we made Solo, we set out to create not just the best drone, but the best aerial photography experience imaginable. While this meant giving Solo smooth and powerful flight dynamics, it also demanded we make a smarter drone, one that could handle the flying so you can retake creative control and focus on getting great video. In the end, we know people really just want great shots: They want access to professional tools that enable them to get those shots easily and consistently, without the need to spend years becoming a professional drone pilot. Solo delivers this promise: You get the shot, every time. 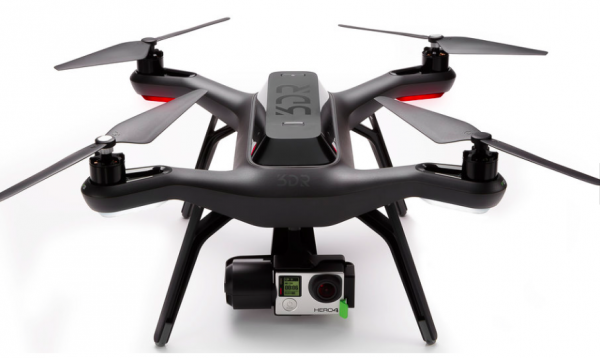 The world’s first smart drone.
What makes it smart? Not only does Solo have the world’s most advanced Pixhawk 2 autopilot system, but it also runs two 1 GHz computers, one on the copter and one in the controller, connected via a powerful dedicated Wi-Fi signal carried by 3DR Link. This processing power enables Solo to do amazing things that no personal drone has ever been able to do.

Helpful brain science-y analogy:
You can think of these computers as Solo’s “frontal cortex”—the most advanced part of the brain. They handle all of Solo’s high-level functions, like Smart Shots, HD video transmission and exclusive GoPro control features. The autopilot—traditionally a drone’s only nerve center—now works sort of like Solo’s “brain stem,” responsible solely for the basic rudiments of flight. By splitting up the work like this, Solo dramatically reduces the likelihood of mechanical failure in flight and opens up a world of possibility for adding advanced capabilities and features. 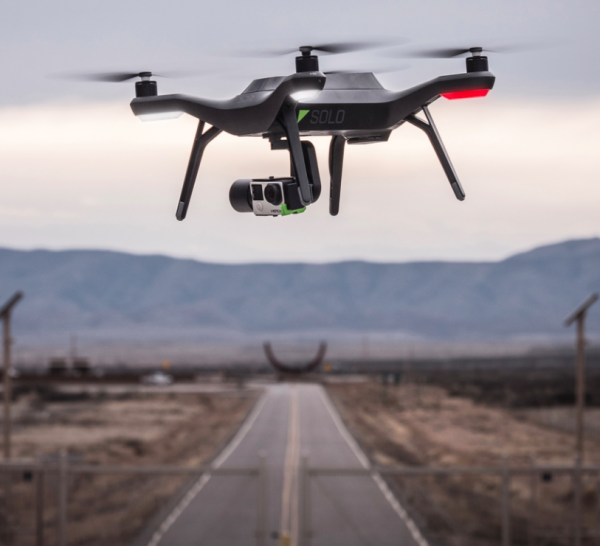 What are its advanced capabilities?
Solo’s intelligence makes it possible for beginners and pros alike to capture professional-grade shots from day one. Its powerful and one-of-a-kind computer-assisted Smart Shots allow you to set up the exact shot you want, then let Solo execute the shot with the precision of a seasoned cinematographer; and with a list of Smart Shots to choose from, the perfect shot is always just a few taps away. Solo is also the first all-in-one drone to offer live streaming of HD video from your GoPro directly to your mobile device, as well as built-in HDMI for live broadcast in HD.

“Smart Shots”
Cablecam: Lock Solo onto a virtual cable between any two points in space. Now you can freely pan and tilt the camera on your known-safe flight path, or let Solo memorize your first and last frames and smoothly pan the camera between them for you—all you have to do is tap “play.” Orbit: Solo can automatically circle any subject of your choosing, keeping it perfectly framed to capture an iconic “wrap-around” shot. Adjust the circle’s radius to get the exact shot you want, even midflight. Selfie: With one touch Solo will fly up and away from you, keeping the camera centered on you so the scenery around you expands in a dramatic aerial pullout shot. Then Solo will reverse that shot as it comes back to you, landing right where it took off.

Follow Me:
Go completely hands-free! Solo can follow wherever you go, automatically keeping the camera on you to capture your every move.

Any other cool features?
A new ergonomic controller built specifically for aerial photography. Its video game-style design breaks from the clunky and complicated RC tradition, so it feels familiar to even new pilots. And in keeping with the video game theme, we even gave the controller a pause button—an airbrake you can hit at any time to stop Solo midflight.

A full-featured mobile app for both iOS and Android. Choose between a live view from the camera or a satellite view of your selected shot, control your GoPro, and even change how the controller responds to commands.

Add the Solo Gimbal and get stabilized cinematic video; full access to GoPro controls; stream HD video to your mobile device; even power your GoPro while you fly.

Can it carry a GoPro?
Solo is built to maximize the GoPro experience. We work closely with GoPro in order to give you the best aerial photography experience imaginable. Together we came up with the world’s first gimbal that offers direct in-flight access to the GoPro controls: With just a click of a button on the controller, you can now start and stop recording and snap the exact photos you want during your flight—or change the GoPro settings from within our mobile app. Additionally, Solo is the world’s first drone that offers plug-and-play live streaming HD video from your GoPro directly to your mobile device. Solo even comes with The Frame from GoPro, pre-installed with vibration isolation, so you can get a beautiful HD video stream hassle-free, right out of the box.

I’m worried about flyaways:
I’ve read a bunch of these stories, and they never end well.
Even though we’ve spent all of our efforts ensuring every Solo owner has the best possible user experience, we have to acknowledge that these things could happen. But don’t worry: Because Solo has built-in computers it can constantly monitor your flight. If you crash or lose connection, the app will prompt you to instantly create a service ticket, which you can submit instantly through your mobile device’s internet connection, wherever you’re flying. If the flight log shows that a system malfunction caused the loss of your copter—the dreaded “flyaway”—3DR will replace the copter and the gimbal if one was installed, and we’ll even give you credit to buy a new GoPro.

Specs:
– Flight time: up to 25 min without payload, or up to 20 min with GoPro and Solo Gimbal
– Controller battery life of up to 4 hours; built-in rechargeable battery (8 hours with optional extended battery)
– Weight: 1500 g; 1800 g with Solo Gimbal and GoPro
– Autopilot: Pixhawk 2
– Video latency: 180 ms
– Wifi range: up to half a mile, depending on environment

For more information head over to the 3D Robotics website.