Sound Devices has been very quiet in recent years on the external monitor/recorder front. I have had a PIX240 for many years and it was my go to choice of recorder when I was using my Sony F3. Not only was it built like a tank but it eventually got firmware than enabled me to record 4444 ProRes. I have been waiting for them to come up with some new solutions for quite some time and it seems like they finally have. Sound Devices will preview its Video Devices PIX-E, a new series of camera-mounted recording field monitors at NAB 2015 (Booth C6040).

This from Sound Devices:
This new line of Video Devices monitors feature 1920×1080 five-inch (PIX-E5 and PIX-E5H) and 1920×1200 seven-inch (PIX-E7) LCDs, a full suite of precision monitoring tools, SDI and HDMI I/O, plus the ability to record 4K and Apple ProRes 4444 XQ edit-ready files to affordable mSATA-based SpeedDrives. The PIX-E5 and PIX–E5H are presently the world’s most compact 4K recording monitors. The 4K-compatible PIX-E Series are the first on-camera monitors to offer the full range of Apple ProRes codecs including the highest quality Apple ProRes 4444 XQ*. This is a 12-bit codec designed to preserve the detail in wide dynamic range imagery captured by today’s high performance digital image sensors.

The PIX-E monitors feature compact, die-cast metal housings and an LCD display protected by Gorilla® Glass 2, making them the ideal choice for cinematographers and videographers looking for monitors that can stand up to the rigors of the most extreme and demanding production environments. PIX-E includes PIX-Assist™, an impressive suite of monitoring tools including TapZoom™ for unrivalled focusing speed, false colors and zebras to help set exposure, guide markers for framing, LUTs and a range of scopes including waveform monitor, histogram and vectorscope. Sound Devices says the new on-camera monitors incorporate a ‘best-of-both-worlds’ user interface that combines easy-to-access tactile buttons and an intuitive touch screen.


The PIX-E records to the affordable, super fast SpeedDrive, an industry standard mSATA drive contained within a custom-designed enclosure. The SpeedDrive, which plugs directly into the PIX-E, doubles as a USB 3.0 thumb drive for very high speed offload to any computer without the need for a special cable or drive docking station. Two SpeedDrive options are available, a 240 GB SpeedDrive and an Enclosure-Only version that allows the user to choose and easily fit any size of mSATA drive. mSATA drives are available in sizes ranging from 128 GB to 1 TB. 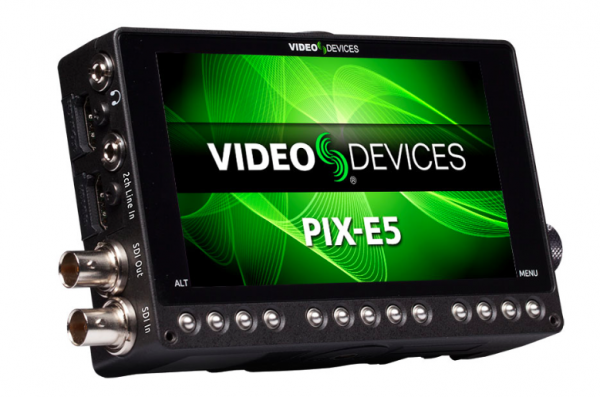 Discerning cinematographers and videographers need high-resolution, color-accurate, sunlight-viewable monitoring with a wide angle of view. The PIX-E Series monitors excel in all those aspects with their IPS, 500 nit, 1920×1080 (5-inch) and 1920×1200 (7-inch) LCD displays. 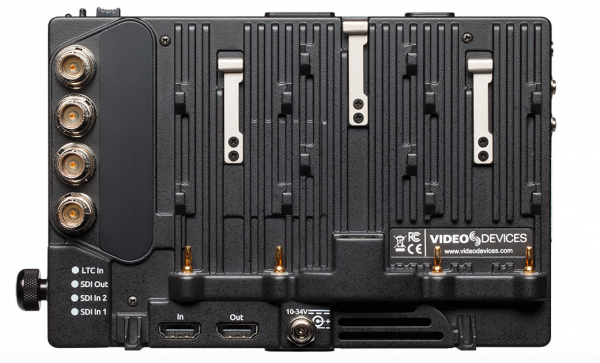 The PIX-E monitors are powered by external DC (10-34V) or dual L-mount Sony batteries with powering seamlessly switching from one source to another should one become depleted or removed.

A great monitor needs to be accurate; it must be able to show the finest detail, be viewable in bright sunlight, and have a range of easy-to-access tools that aid with perfecting the focus, exposure, framing and color balance. According to Sound Devices the new Video Devices monitors do all of those things and with their ability to record the highest quality Apple ProRes edit-ready video, the PIX-Es are an affordable must-have tool for any video production professional.You can check the PIX-E out at NAB 2015 (Booth C6040). 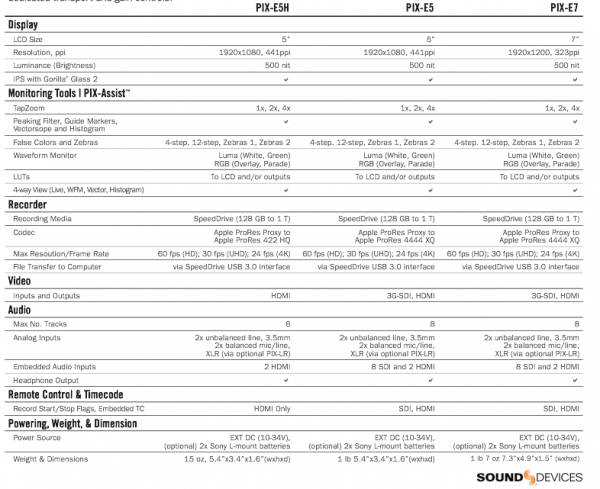 It will be very interesting to see how the PIX-E series measures up against the Atomos Shogun and Convergent Design Odyssey 7Q in both price and performance.