Until I started flying the DJI Phantom 2, I was never a GoPro enthusiast. But the 3-axis Zenmuse gimbal is so smooth that I’ve started to incorporate GoPro footage in many projects, from documentary shoots to corporate videos. And not just in the air – I hold the Phantom 2 and walk around offices, get pushed around on rolling chairs, stand up through a car’s sunroof for driving shots, and so on.

But using a quadcopter feels overkill for many of these grounded shots – not to mention the hassle of traveling with one. It’s also not that safe to hold a quadcopter while shooting from a car – rapidly spinning propellers are only inches away from your hands and face. 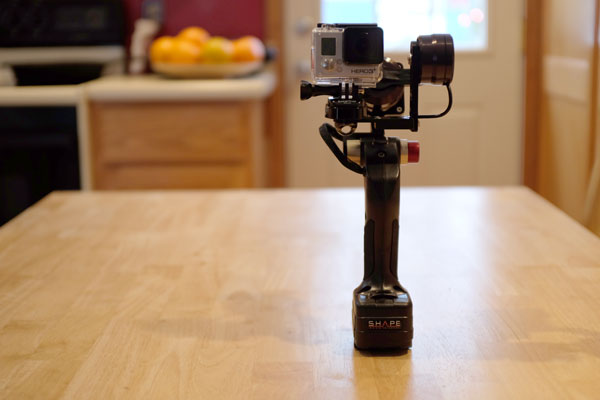 Thankfully there are an assortment of gimbal solutions out there for small cameras. I recently tried out the Shape ISEEI, which has been around for a few months now. Shape is a Canadian company that makes solid, well thought-out gear that is built to last. 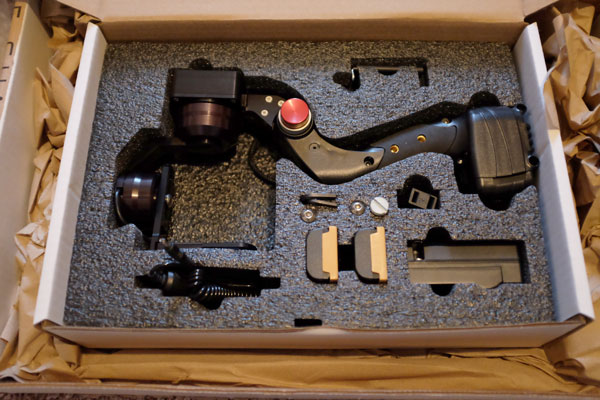 The ISEE ships in a sturdy box and comes with almost everything you need. There are two generic LP-E6 batteries, a home plus car charger, and the screws and wrenches needed to properly balance your camera before using the gimbal.

There’s also a 1/4-20″ thread on the bottom, so you can attach the ISEEI to other rigs. Here I’ve placed a quick release system on the bottom, and attached a simple monopod extension. The ISEEI has a big red button on the side to angle the camera mount, so with that and a monopod, I can fly the GoPro high above desks in an office, over trees and rooftops, or around difficult corners.

The ISEEI is easy to balance, and once you do, you can attach the GoPro with housing – or a smartphone, or other small cameras – to it in the same spot without having to balance again. Overall it is easy to use and feels sturdy. The weight of the ISEEI adds better stability to the tiny GoPro, and the batteries will last a while.

There are a few negatives though. First, you need to provide your own screw to attach your GoPro or other camera to the gimbal, and something that can be loosened/tightened with your hands, without bringing an allen wrench or screw driver. I used a piece from a BlackRapid camera strap. But I wish Shape provided something like this. 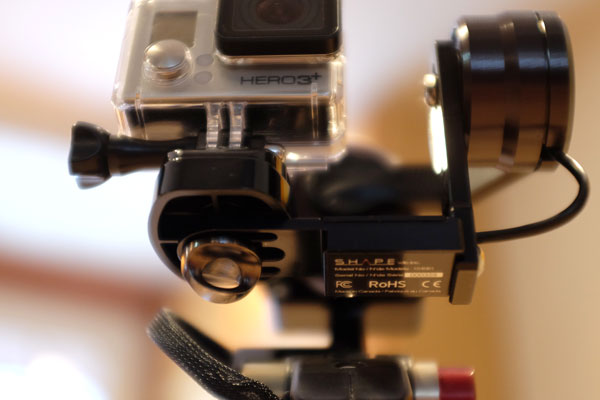 Once you’ve got the camera attached and balanced, the gimbal does a good job of keeping the camera straight on. But, I miss the ability to tilt the camera down for more shot variety – something I can easily do on the Phantom 2/Zenmuse gimbal. (Ed – Competing gimbals like the Feiyutech G2 and iFootage Hummningbird have this function).

But by far the biggest disappointment is the gimbal itself, which falls a little short in creating smooth footage. While the ISEEI is certainly well made, it’s only 2-axis design. While that helps steady the footage if you’re standing absolutely still and barely moving the camera, for any walking shot, pan or tilt, or just about any motion, the ISEEI simply doesn’t do as good a job as a 3-axis gimbal would. (Ed- Phantom users will remember the difference between the H3-2D and H3-3D gimbals and this is similar).

In the video up top, I tried to use the ISEEI in a number of different ways, from walking and pointing the camera out, to shooting a selfie, to doing a very slight motion around some trees. Shape doesn’t recommend car shots, but in my experience the ISEEI actually did great in the car, much better than other kinds of movement.

So, I hope the next iteration of the ISEEI will have 3-axis – NAB is only just around the corner after all. There are now rival handheld gimbals that can carry a larger camera and produce some astounding footage – take a look at Dan Chung’s review of the Nebulu 4000 here. DJI is also set to release a handheld unit to pair with the Inspire 4k camera and 3-axis gimbal – although this is of course far more expensive if you count the Inspire itself. In the meantime, I think I’ll continue to carry my Phantom quadcopter along for the GoPro shots.