Teradek were at BVE in London this week showing their new Live:Air iOS production suite for the first time. This allows for live vision mixing, titling and graphics of several HD video sources connected wirelessly to an iOS device. Everything is controlled via an elegant touch interface and works best on the latest iPad Air 2. You can even use Live:Air with a single camera and still use it to apply effects and graphics.

They also had their latest VidiU mini encoder that can encode video from a HDMI source like a GoPro or regular video camera to H.264, then stream it via wi-fi or Bluetooth to popular live video platforms, which is ideal when using modern video production techniques. It also has an internal battery that can power the device for several hours. 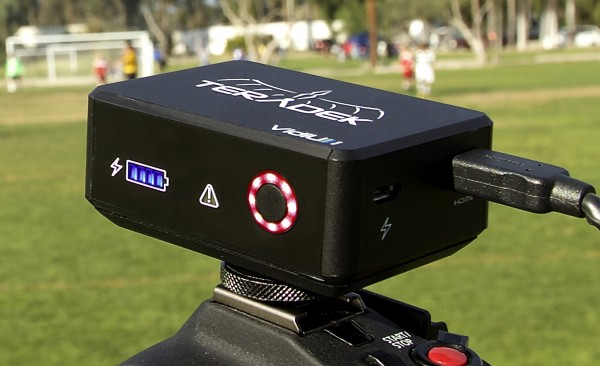 At BVE they demonstrated Live:Air live mixing between several VidiU Mini equipped GoPros. Not only could you make straight cuts, you could also crossfade and adjust the audio levels on each source individually. Another impressive feature was the ability to zoom into the image and in effect create multiple live shots from the same image. Other Teradek encoders like the Cube can also be used to feed into Live:Air so if you have one already then you simply need to download the app to get started.

I can see numerous applications for this kind of technology. It would allow a single operator to easily create a multi-camera live show with basic tools. I can see many smaller news websites, and perhaps even some larger ones, using this technology to produce web series. It could even be used for events and sports coverage by local news websites.

The VidiU Mini will cost $499 US and Live:Air will be available as both a limited free download or a paid version on the Apple app store. You can learn more about both on the Teradek website.

Full disclosure: Teradek are a sponsor of Newsshooter.com