When the DSLR filmmaking revolution took off in 2008, a set of ‘rules’ soon emerged about how to get the most out of these cameras’ video capabilities: shoot in manual mode, record audio separately, use a rig, and so on.

The ‘rules’ are still a useful set of guidelines for filmmaking with DSLR cameras (and mirrorless ones), but I find myself increasingly ignoring them. Perhaps that’s because they were developed for filmmakers who mainly shoot adverts or corporate videos (whereas I make documentaries), but it’s also because camera technology has advanced so far in the past seven years. Like many people, I recently sold all my Canon gear and bought the Sony a7S, and it’s cameras like this which are re-writing the rules of filmmaking.

This became obvious when I made a short documentary for the Guardian about the Gadhimai festival – the world’s biggest animal sacrifice. The event is held once every five years in Nepal, in honour of the Hindu goddess Gadhimai. By some estimates, over a million devotees attend, and over one hundred thousand animals are sacrificed, all in the space of two days. The event has attracted fierce criticism from animal rights activists, but for those who take part, it is an important and intimate opportunity to thank the goddess Gadhimai. 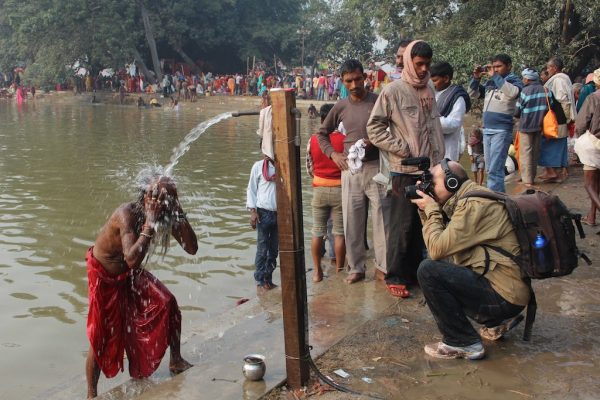 With so many people gathered in one place, there was little time (or space) to set up shots or predict what would happen next. It was true documentary filmmaking, which by my definition, is a film in which you have very little control of what is going on around you. In circumstances like these, some of the tenets of DSLR filmmaking may be more of a hindrance than a help. So here are five ‘rules’ of DSLR filmmaking which I think are sometimes worth breaking:

1. Always focus manually:
Of all the ‘rules’, using manual focus seems to be the most sacred, but cameras like the Canon 7D MkII and the 70D now have such good autofocus that there are many instances where it may be a better option for filming news and documentaries.

The autofocus on the Sony a7S (with Sony lenses) is also excellent, and transitions in a nice, natural way, even in low light. When I was trying to get shots in the chaos of the festival, it proved invaluable. I tend to set my focus to constant AF, and then use the AF/MF button to lock it on manual focus when necessary. I still don’t nail the focus every time, but I do so more often than when I was just relying on manual focus.

2. Always shoot in manual mode:
I still use manual mode the majority of the time, but in the middle of the crowds of the Gadhimai festival, I sometimes switched to shutter priority mode and/or auto ISO. This really freed me up to concentrate on composition, or simply staying on my feet. The high ISO capability of the a7S is of course legendary, but I do think there’s a risk you overdo it – you still get noise with high ISOs and personally I try not go to above 12800.

3. Always record audio externally:
This advice makes sense when you’ve got plenty of time, but for quick turnarounds I’ve always found that I could get pretty good audio directly in camera, even with a Canon 60D; and the internal audio in the Sony a7S is better than in the Canons. Being able to change audio levels while recording is another strength of the a7S, although I find the Beachtek MCC-2 is an invaluable accessory, which gives me two audio inputs which can be controlled (or at least lowered) separately, as well as two points to add a light or wireless mics.

4. Invest in top quality lenses:
Sure, if you have a bottomless bank account, it makes sense to buy the best lenses on the market. But you certainly don’t need them to make decent films. When I bought the a7S, I had the option of buying the Sony FE 24-70mm f4, which at the time cost around £1000, or the Sony FE 28-70mm kit lens, which costs a little over £200. I chose the latter, and I find it excellent. For online news video, I very much doubt anyone could tell the difference.

5. Use a rig:
There are no doubt plenty of people in the DSLR video accessories business who would disagree, but I can’t help but think that many of the rigs, EVFs and cages on the market are not essential for good filmmaking. This is partly because cameras like the Panasonic GH4 and a7S have built-in viewfinders, but also because part of the joy of these cameras is their small size. My Sony fits in my jacket pocket, with the lens attached. You’ve got to ask whether the extra functionality you might gain from accessories outweighs the speed and intimacy you lose by having them.

My advice is to take the ‘rules’ of filmmaking with a pinch of salt. After all, rules are made to be broken.

Pete Pattisson is a freelance video journalist. You can find out more about his work on his website.