A new social media infused project management platform has opened its digital doors for preregistration. Its called Movidiam and if you’re an independent filmmaker, production company or even brand — I think you have a lot to be excited about.

We’re seeing multiple sites offering creative collaboration project management systems pop up these days, such as Frame.io and Arc 9. I believe this shows a real hole in the market — a product that’s missing. And based on my work flow which is largely based on email and Google Docs, I see why.

Before you brush this off as “yet another creative collaboration site,” pay close attention to the description above — this is much more than a site to improve workflow. Movidiam is both a social network as well as an interactive project management system made for filmmakers (by filmmakers). Think of it as Vimeo + Linkedin + Facebook + WordPress + Mandy + a project management system.

This system wasn’t made with Steven Spielberg or J.J. Abrahams in mind. Movidiam was created with the much more common 21st century filmmaker in mind: you and me.

“We are living in a connected and mobile world where the traditional agency model is challenged, where remote freelancing is becoming the norm and where the demand for brands to create a constant stream of quality films has dramatically increased,” says co-founder George Olver.

“Movidiam was created to address these challenges by providing a streamlined and collaborative production process from concept to completion.”

So: What is Movidiam, how does it work and what can it do for me?” I had these same questions and while I had seen some talk of the upcoming system at IBC it wasn’t until I sat down with George Olver to take a tour of the preproduction system where I truly got a better understanding of its potential power.

On a the most basic level Movidiam connects content creators, agencies and companies. A brand looking for a filmmaker can search the system’s geobased database and see filmmaker profiles, complete with embedded videos, a free blog custom designed for the site and see the filmmakers credentials, history, awards and collaborations.

Down the line, the metadata of your films, projects and credentials will also be searchable. So a company could put out a brief and have it sent to only people or agencies who are actually qualified. Alternatively, a freelancer, producer or agency would only receive the brief, if that brief meets their set financial quantifications and profesional qualifications.

For all parties involved, this can make posting or responding to a brief much more efficient. Instead of having an enormous list of poorly paid jobs, like we mostly see on Mandy, this could potentially cut some of the bullshit out. 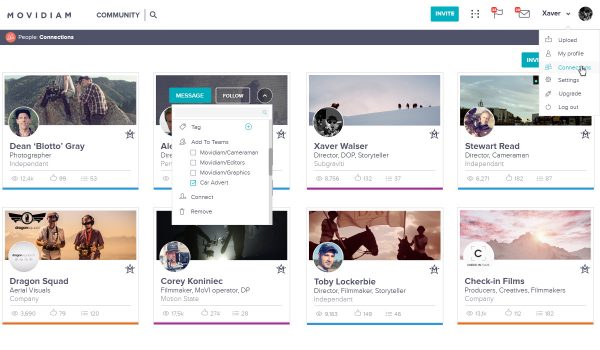 From within a project on the site, one can also search production team members. You might see a video with great lighting but a poor story and want to track down the gaffer. This system connects production team members digitally, much like Facebook or Vimeo’s credits. However, you’ll be able to find out a lot more professional information about those crew members with this system.

This is a quick over view of the social side of Movidiam.

While this is great, it’s the production side of Movidiam which I’m more excited about.

The project management system has many of the tools we really need in a single location, in a clean and simply designed user interface. Things like production timelines, budgets, storyboards, crew locations and contact details are all in one place.

One feature I’m personally interested in comes in the form of revisions. Unfortunately, most of my revisions happen via email. Ill send a draft of a video to an editor and they will send back a long list of time codes with comments or issues. And when you get 500+ emails a day and a working on multiple projects you can really waste a lot of time trying to simply update videos and find the information you need, when you need it.

Users can then scroll through or navigate through a video via the comments and simply move directly from one comment point to the next.

Furthermore, if you’re like me and usually have 10-20 projects going on at any given time, this system can give you an overview of all of them. A user can see all of their projects and quickly see at what stage in the process they are all at, how the budget is holding up or where deadlines are across many videos.

This is where I see huge potential for video newsrooms. Potentially, an editor or director of a newsroom of 50 video journalists could see an overview of where all of the projects are, see storyboards, scripts, budgets, deadlines or story ID information which might correspondent to other parts of the newsroom. That editor could see current drafts of each of those projects and without having to send a mass email out to all of those 50 journalists, would be completely up to date on where each project was at and what each employee was doing.

This is a basic outline of what the site aims to do. Its a bit hard to tell what place it could have in the industry, but I see huge potential in it from getting gigs to connecting with other filmmakers to simply having more organized and streamlined productions.

Movidiam will have two main options for users: a free site and a paid subscription. The free account allows users to profile themselves, create portfolios and blogs, be searchable and work on any existing project that they have been invited into. The pay wall unlocks all the production management tools and will be on a subscription basis of $25 a month. Its great to note here that even free users can use paid services, if they are invited by a member who has subscription services. Multiple user accounts, corporate, agency and enterprise group accounts will also be available.

I do think the site will be more powerful with a bigger user base. If there’s more filmmakers on it, it will be a more realistic place for agencies and brands to search find creators. Movidiam is offering two free months of full access to those who preregister for the beta site, so I encourage everyone to sign up here, as more users can actually benefit us all, across the industry.

Jonah M. Kessel is a video journalist with the New York Times. He contributed to a Pulitzer Prize winning series and been awarded the Robert F. Kennedy Award for Justice and Human Rights. See more of his work at jonahkessel.com or follow him on Twitter here.