Sony today announced the 4K capable PXW-FS7 Super 35mm E-mount camera recording in the XAVC codec. Equipped with a CMOS sensor it is designed to be ergonomic on the shoulder and offer easy access to controls. The camera has a built-in high quality combination screen/viewfinder and the all important ND filter wheel. Gone are SD and SXS cards – the recording media is Sony’s latest XQD card.

Priced around $8000 US it falls in the same price range as the existing FS700 and offers features almost on par with the F5 – which is almost double its price.

It can record up to 180fps in full HD. The camera will be able to record a range of regular gammas, along with S-Gamut3/SLog3 & S-Gamut3,Cine/SLog3.

The FS7 features two XQD card slots that support simultaneous recording and relay recording. A new XQD G series card with ultra-high speed transfer up to 400MB/s (read) and 350MB/s (write) has been developed to cope with the higher data rates.

Sony seem to have taken what they have learned from both the FS700 and F5 and designed a hybrid of both. The FS7 seems to have addressed a lot of the issues Sony FS700 owners expressed, while incorporating key features found on the F5. The end result is a camera that looks to tick a lot of boxes in terms of specifications, usability and price.

One nice feature is that the camera runs on Sony’s BP-U type batteries – the same as the ones in the EX-1, EX-3 and PMW-200.

The FS7 can record QFHD in 4:2:2 10-bit colour sampling at up to 600Mb/s in the XAVC Intra codec. This is the same recording format used in the Sony F5 and F55 and shouldn’t be confused with XAVC-S found in the a7S that is only 8-bit. For backwards compatability it is also able to record in a variety of recording formats including Long GOP, and MPEG HD422 – an important feature for some broadcasters and production houses.

An option to record Apple ProRes 422 will be available from early 2015 via a firmware update, but to do this requires additional hardware – more on this later. There is no indication about what this will cost.

It has a CMOS sensor with 8.8 million effective pixels. The FS7 features a base ISO of 2000 – similar, if not identical, to the specification of the sensor that is found in the F5. The sensor is being touted as having high sensitivity, low aliasing and reduced rolling shutter. I expect a pretty decent low light performance from this sensor, hopefully better or on par with the F5.

Sony are also offering an optional XDCA-FS7 extension unit that is essential if you want to record ProRes internally. This extension unit also features the ability to mount a V-lock battery and also adds the ability to record 4K or 2K 12-bit RAW using either the Sony HXR-IFr5 (the same unit that docks with the FS700) and the AXS-R5 recorder. You can also record the RAW output to the Convergent Design Odyssey 7Q – as you can do now with the FS700. The camera has dual SDI outputs and HDMI 2.0.

Like many of Sony’s recent camera releases the FS7 features the MI (multi interface) hotshoe. Devices like the Sony UWP-D wireless radio mic (with MI shoe connection adapter) can pass audio and also be powered via the shoe without the use of cables. This same system can be used with other comparable accessories like a video top light.

The camera that has clearly been designed for shoulder-mounted use and the ergonomics should work very well for news, documentary and event shooting. An integrated shoulder pad is fitted to the base of the camera. To further enhance run-and-gun handling Sony have also released the VCT-FS7 baseplate system that features an adjustable shoulder pad and 15mm rod support.

Another key design feature on the FS7 is the supplied handgrip that is mounted on an extendable arm and allows access to many camera functions. It will be interesting to see how robust the arm and handgrip when used in the field. The FS7 body is made of die-cast magnesium alloy and is fully-sealed for use in extreme environments.

The camera’s OLED viewfinder uses an attachable loupe design very similar to the one included with the FS700. It is attached via an adjustable rod which allows for optimal eye positioning. This means however that the screen doesn’t fold away into the camera body – it either stays on or you have to take it off completely. The viewfinder screen itself though is of a high quality.

You will also be able to buy it with a new E-mount zoom lens (available in November). The FEPZ 28-135mm f4 OSS is the World’s first 35mm full-frame interchangeable power zoom lens – first seen in prototype form at NAB earlier this year. As well as featuring a constant f4 aperture it has independent rings for focus, zoom and iris control. Built-in Steady Shot stabilisation and a new SSM (Super Sonic wave Motor) to reduce zoom and focus noise round off the lens specification – I’m looking forward to seeing how well this lens performs. The lens also looks like a perfect match for the a7S as it is has full-frame coverage. 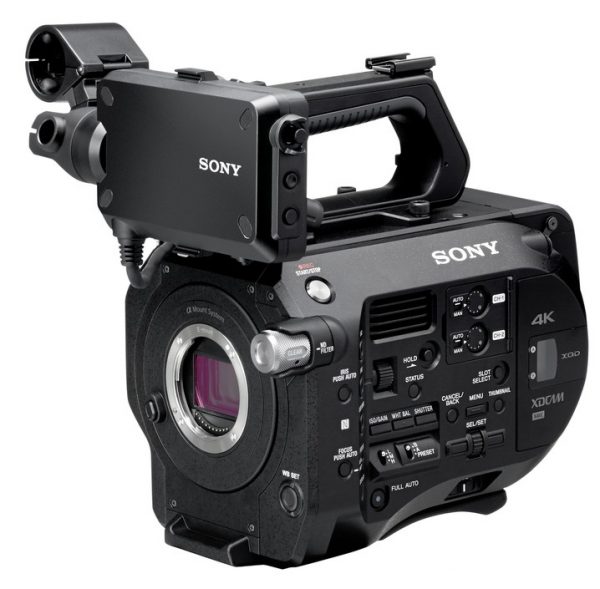 Sonys decision to use E-Mount instead of the FZ mount from the F3/F5/55 will be welcome news for many users. The ability to use cheaper Canon EOS lens adaptors and speed boosters like the popular Metabones gives the camera added flexibility.

Sony are at pains to point out this is not a FS700 replacement, but with the name FS7 and the superior in-camera recording many are likely to question that assertion. I think this is an interesting move for Sony – while it is clearly pitched as a Canon C300 competitor, the competing cameras that are closest in specification are actually Sony models. In fact it isn’t Canon users who seem most concerned online – FS700 or F5 owners seem more disgruntled on the forums. Some users have questioned the logic of Sony releasing this camera given that Canon hasn’t launched anything new in the Cinema EOS series recently.

Sony designers have clearly taken feedback from users and developed a formidably specced camera for the price. While some F5 and FS700 owners may well feel their investments are less secure after this announcement, I think that Sony’s real target in this is Canon’s C300, Blackmagic’s URSA and AJA’s Cion. The Sony FS-7 is another milestone in offering you bang for your buck.

The camera will be available in mid-October.

Here is the full release from Sony:

The 11.6 million-pixel Super35 ‘Exmor’ CMOS sensor within the PXW-FS7 delivers stunning sensitivity, shallow depth of field, a high signal-to-noise ratio and fantastic low light performance. The camera has the ability to record QFHDi with 4:2:2 10-bit sampling up to 600 Mbit/s, with support for a variety of recording formats including XAVC Intra, Long GOP, MPEG HD422 and Apple ProRes 422 available early 2015 by firmware update.

Ergonomic design ideal for one-man operation in demanding conditions
The new camera has been purpose-built to provide a versatile range of creative shot options while sitting comfortably on the shoulder, even after hours of operation. The supplied grip, easily adjustable viewfinder and fully-sealed, die-cast magnesium chassis have been designed to provide robust usability in dusty or humid environments and for ‘run and gun’ applications.
“Filmmakers around the world have told us they want a package which links high quality codecs, unlimited slow and quick-motion recording and the flexibility to switch between various lenses, but without the need for a rig,” explained Bill Drummond, Strategic Marketing Manager, Sony Professional Europe. “We’ve built the PXW-FS7 to give customers a vast range of production, style and format choices in a form factor which allows the operator to do it all, right from their shoulder.”

Key features of the PXW-FS7
Super35 ‘Exmor’ CMOS sensor with 8.8 million-effective pixels. The PXW-FS7 is able to capture great image quality without needing significant lighting support. It has high-speed image readout characteristics, such as 240 fps while recording 2K RAW on an external recorder, responsive sensitivity (ISO 2000) and a high signal-to-noise ratio. The PXW-FS7 supports QFHD up to 60 fps at launch, with an upgrade to 4K 4,096 x 2,160 resolution due to be made available in early 2015.

Flexibility across recording codecs. The PXW-FS7 is compatible with Sony´s new XAVC Intra and XAVC Long GOP formats, each supporting 10-bit 4.2:2 recording for Full HD recording. Recording in QFHD resolution, SlowMotion up to 180fps or even Full High Definition with 60/50 progressive frames is possible. By using the optional extension unit XDCA-FS7, the PXW-FS7 is capable of natively recording in Apple ProRes 422 codec, planned to be available in early 2015 by firmware update. In addition, thanks to the XDCA-FS7’s Raw interface, the PXW-FS7 is capable of 4K/2K Raw recording with Sony’s HXR-IFR5 and AXS-R5, or with a compatible third-party external recorder.

Easy mobility and choice of shooting style. Sony has also today introduced the VCT-FS7, a light-weight rods support, featuring 15mm rods and an adjustable shoulder pad. This enables the use of additional Matte boxes, the easy attachment of Follow Focus systems or of an external recorder. In addition to the on-shoulder operation, the PXW-FS7 can also be set-up on a tripod and as a handheld camera. The supplied handgrip provides easy access to relevant functions.