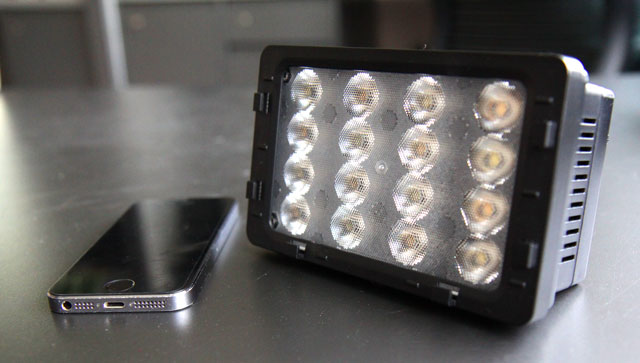 For many doc shooters, light kits are the bane of single shooter, portable filmmaking. Our cameras, lenses, audio, and support systems can fit into a small backpack, but the lights need their own luggage. And often you’re only using the lights for the interviews.

Luckily for us, powerful, quality lights are getting smaller. I’ve been carrying around the lightsaber-sized Westcott Ice Light as my main key interview light for over a year, and I recently picked up a tiny Cineroid L10VC as a fill or rim light. They’re amazing when there’s not much ambient light to compete with, but neither the Ice Light nor the Cineroid can compete with a window.

Enter the TorchLED Bolt 220. It weighs 1 pound, is dimmable, has variable color between 3200-5600k and is really, really bright. I’ve been using it alongside the Ice Light and Cineroid for a couple months now, and it is lovely. It has a 220-watt output, can be powered via DC plug, a 14.4v brick battery, or Sony L-series batteries. It has a 1/4″-20 thread at the bottom for easy mounting on a light stand (I use the Manfrotto 5001B nano stand), or on a Dinkum ActionPod or Nasty Clamp. 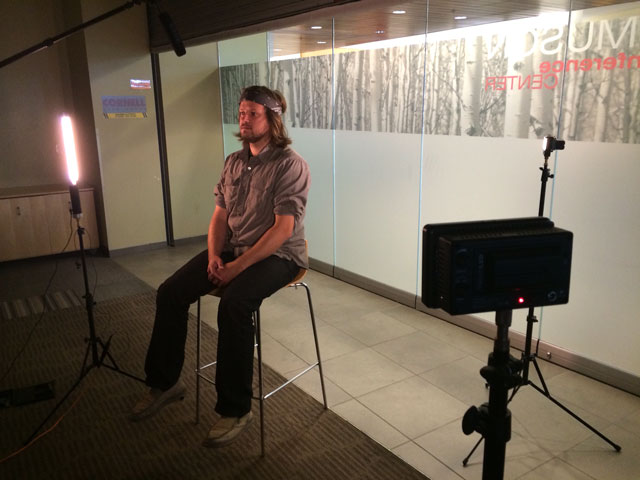 So if you need a small fill light for a variety of scenarios, something that you can keep in your backpack, place on your camera, hang from a ceiling, the TorchLED Bolt is a no brainer at under $300. The same Sony batteries you use for your Atomos recorders will keep this light on for a couple hours. The Cineroid L10VC is even smaller, also is dimmable and vari-color, but has a lot less light output for the same amount of money.

The bigger question is, can the Switronix Bolt be used as your interview key light? Can it replace a 1×1 panel, or make your interview subjects look as good as an Ice Light?

Airbox lights make a handy inflatable diffuser called the Airbox Macro that spreads the output. Could I use it to transform the Bolt into a key light?

The following are some non-scientific tests taken in a pitch dark room. All images were taken at the same exposure and white balance (in camera), and I set the lights to as close to 4000k as possible to turn on as much of the LED bulbs, except for the Ice Light test. The lights were about 1 meter from the wall. 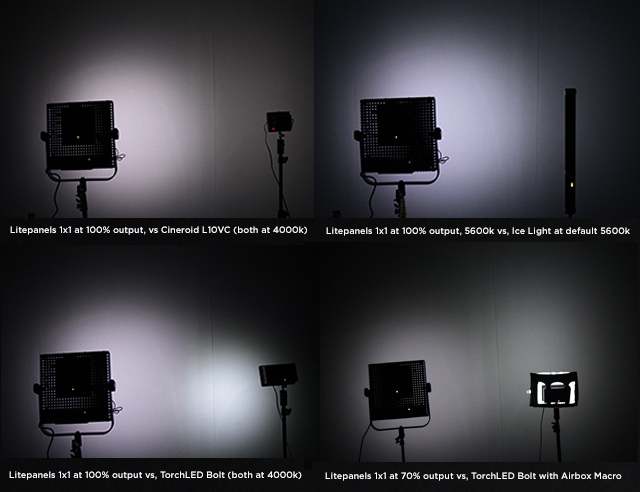 Because the Bolt is so much smaller than the 1×1, I expected it to be bright with a very narrow throw. But what’s really surprising is with the Airbox Macro on, you can see the Bolt is diffused into a larger area than the 1×1. And with the 1×1 dimmed to 70%, the Bolt now looks like a very attractive 1×1 replacement for an interview key light, at just a fraction of the size and weight (and cost). Unless the interview is outside, I’ve found that I always dim the 1×1 for interviews anyway.

In a pitch dark room with just one light, it’s easier to see how a light flatters your interview subject. Shadow drop off, overall coverage, how much the light wraps around the face, and even how the subject reacts to the light are all at play. I set each light at a distance and dimmed to a level that looked the best – again, not entirely scientific, but interesting results nonetheless. 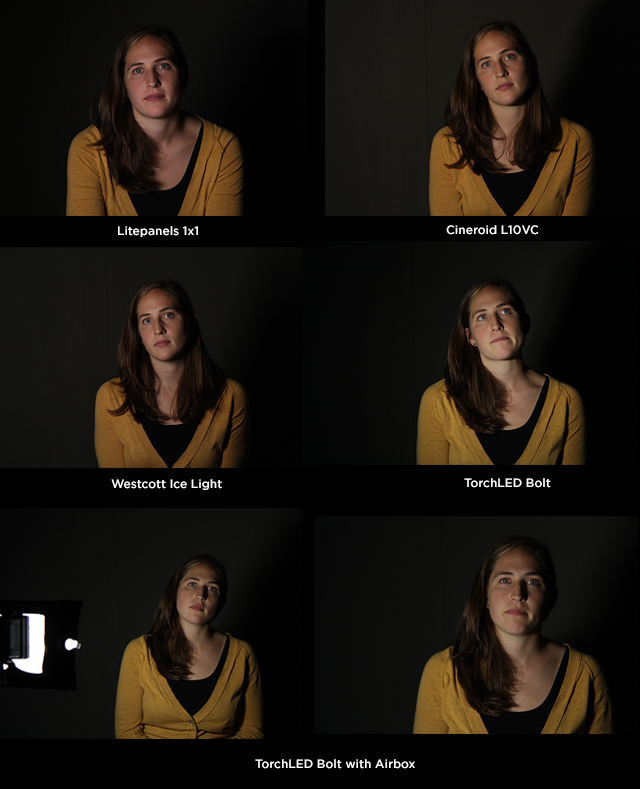 To my eyes, the Bolt and the Cineroid on their own made the subject look like a deer in caught in the headlights. The Ice Light seemed to have the most flattering wrap around the face. But the Bolt with the Airbox, amazingly, had a very similar look as the 1×1.

More importantly, I think, is how useful these tiny, portable lights can be in an actual interview scenario. With an Ice Light for key, TorchLED Bolt for fill, and Cineroid for rim, I’ve been able to create decent interview lighting with gear that fits into my standard backpack and weighs less than a couple of lenses.

One thing I couldn’t measure accurately was the color reproduction of the lights. Subjectively I would say the Litepanels 1×1 has a nicer rendering of skin tones. For some shoots this is critical, but for much of what I do the Bolt looked just fine. 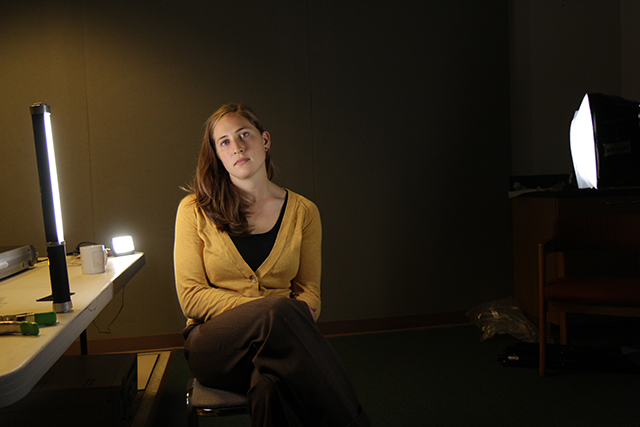 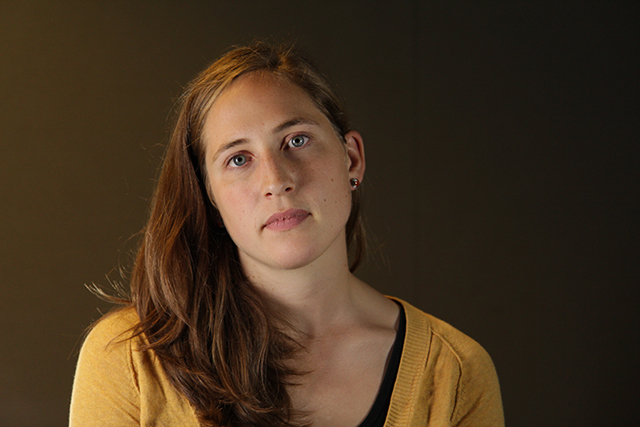 I’ve been using my PBS station’s Litepanels 1×1 for quite a while, but having gone freelance a couple weeks ago, I’ve been debating whether I need to buy my own set of 1x1s at all? It seems like I could replace the 1×1 with the TorchLED Bolt for quick and dirty interview lighting.

For situations when you need to light a large space, it makes sense to have bigger, brighter lights than the Bolt. And there are many affordable LED panels, fresnels, or fluorescent lights for those jobs. But for shoots where you want to carry your entire kit in a bag or two, the Switronix TorchLED Bolt 220 (with the Airbox Macro) is a must have for me.

Slavik Boyechko is a documentary filmmaker based in Anchorage, Alaska. You can follow him on Twitter @akvideoshooter.