If you are an owner or potential owner of Sony’s F5 it probably hasn’t escaped you that a recent hack has made it possible to record 4K internally on the camera. By default the F5 could only record up to 2K in XAVC, but the hack removes this resolution barrier.

There has been much debate about whether customers are being well served when major companies differentiate between models using firmware rather than hardware. Some argue that Sony and other major companies are well within their rights to charge what they want for similar models with features enabled or disabled via firmware – it is after all a free market where no-one is forced to buy anything. Programmers and developers don’t come free and having common code then disabling features is a common practice in the tech industries these days.

Others argue that manufacturers should not ‘cripple’ products that are physically capable of more than their firmware allows – you have purchased the hardware and it is unethical of firms to restrict what you can do with it via firmware, or charge for features that are added by paid firmware upgrades.

Paul Ream is the man responsible for sharing this latest hack with the world and interestingly he is working cameraman with a prestigious career, not a software engineer. Naturally, this made us curious: why would he do this and what were his motivations?

Paul has been a cameraman for 37 years. He went straight from school to be a trainee at UK broadcaster ITV. He later became Head of Cameras at Sky News for their first six years of operation. For the past 18 years he has been a freelance cameraman. He has a wealth of experience and knowledge and has seen the industry change over many years. Paul has become increasingly frustrated with new cameras being released on an almost weekly basis and is concerned that investment in kit as an owner/operator is becoming harder and harder to justify.

Q. As a freelancer working in today’s market how hard is it to sustain a living given that technology is changing so fast?

It’s much harder to sustain a reasonable living as a freelancer owner/operator in today’s market. You’d think that the lower cost of professional cameras would make things easier, but actually what happens is the pressure from production to lower your daily rate increases. Because the cost of entry is also lower, there’s more competition from people owning pro-level kit.

Q. Is it frustrating as an owner/operator when new cameras are released on almost a weekly basis? How quickly is your camera and equipment depreciating in value?

Although 10 years ago, pro cameras were considerably more expensive, most owner/operators would finance these over say three years.  Because the cameras had a life expectancy of probably five years, you could buy a new camera safe in the knowledge that after you’d finished paying it off, you still had about two years of making a profit from it. The old Digibeta cameras were a great example of this, and a good investment for most people over many years. Now we’re lucky to finish paying for a camera before clients want us to have something else. This is very frustrating for anyone trying to earn a living.

Q. Would you like to see camera manufacturers have fewer models and a system where you just pay extra for added features? Or do you think a camera should be released that is fully functional and doesn’t have features purposely disabled?

Personally, I don’t think camera manufacturers should ever release cameras that have built-in features deliberately disabled. You’d think that restricting functions would broaden the potential market and make lower models more affordable for everyone. What actually happens is that everyone soon realises the obvious marketing ploy, and this damages the reputation of the whole brand.

Q. The F5 is just one example of many cameras on the market where manufacturers have used firmware to differentiate between models. Do you think owners of cameras should be angry about this?

Contrary to what many people have said about the hack for my F5, I didn’t feel entitled to anything more from my camera than I’d originally paid for. It’s F55 owners that should be angry because it’s their investment which has been damaged by cheap marketing tricks. If they had realised there were so little differences between the cameras, would they have paid the extra?

Q. How did you come up with the idea for the hack in first place? Had you been looking into it for a long time, or was it something you just stumbled across?

Some time ago I wondered if you could load F55 firmware onto an F5, but I quickly realised that this would cause too many issues. More recently, I wanted to rename a lot of my setup files and found that using the camera menu was a laborious way to achieve this. I loaded all my setup files onto my computer to rename them. On realising that these were just plain text files I wondered what else I might be able to change. It was a process of elimination and repeated editing, saving the file and rebooting my camera to work out which codes changed what settings. From the seeds of an idea to achieving 4K on the F5 took about two weeks. I think we have just scratched the surface of what might be possible with changes to the set up files.

Q. Once you discovered the hack was possible did you have a hard ethical decision to make as to whether to share it with the world?

Once I’d discovered the way to enable 4K on the F5, I did consider the ethical implications very carefully. While I knew many F55 owners would be upset, the method I found to achieve the result was so simple I was sure someone else would discover the same before too long. I deliberately announced what I’d discovered a few days before releasing exactly how to do it, partly because I wanted to give Sony time to react. 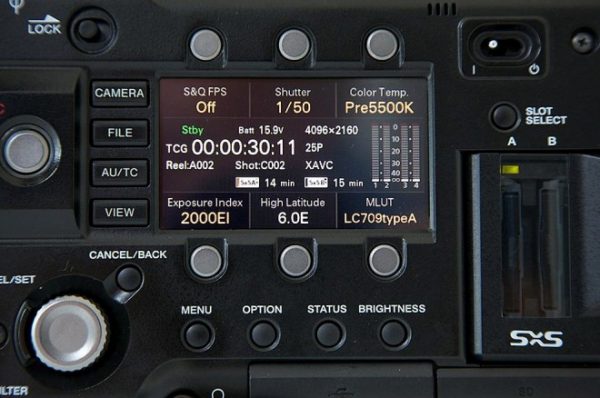 Q. Camera manufacturers would argue that they are making cameras with different features at different price points so people have more choice in the camera they buy. Is the ever increasing choice of cameras offered in the market a good or bad thing for our industry?

I totally get why camera manufacturers produce many different cameras at many different price points to give us all choice. But there’s a point when the number of choices becomes ridiculous and simply confuses the market. What’s the fundamental difference between what a wedding videographer wants and a news cameraman? I haven’t counted how many different models of camera Sony currently produce, but when I last looked it was crazy. How many do we need?

Q. Would you like to see cameras released that are fully functional and don’t have disabled features?

Personally, I would rather pay more for a camera that I know has all the functions it’s capable of properly enabled. Conversely, once I’ve paid more, I don’t want to think others have got exactly the same camera for less money, and that this can be simply hacked later!

Q. As a collective group of owner/operators out there what should we be doing to protect our investments?

The best way owner/operators can protect their investments is to only to buy equipment from companies that support and listen to their customers.  I think the F5/55 are great cameras and I was very happy to hear Sony say they had long term plans for their future.  Let’s hope they support us with that promise!

Q. What did you hope to achieve by showcasing this F5 hack?

All I hoped to achieve by making the hack public, apart from a little publicity for our podcast, was to start the conversation about how cameras are marketed and a debate about what we’re actually paying for.

Q. What advice would you give to owner/operators about their camera choice given how fast cameras become outdated?

The only advice I’d give… buy an F5 – they are a great camera!

The problem for most freelancers is that they don’t actually choose the camera they want. Their clients dictate what they should have.