Shooting documentaries for broadcast television often involves working on a very tight schedule with little to no set-up time – you’re given a very limited time to achieve good results. A recent documentary I shot in Japan on humanoid robots was no exception. It was shot over 11 days in 4 different cities and that time included all the travel. Different methods of getting around, including planes, trains and automobiles, always makes packing and logistics very tricky. To make things even more complicated I had to take two cameras as a lot of the interviews we shoot require multiple angles.

In Japan people’s schedules often run to the minute: If a person says they have one hour of time for you, they mean literally one hour. I encountered this numerous times during the shoot, where I had an hour to not only film a 45-50 minute interview and reversals and two shots, but also shoot all the B-roll. This often meant making large sacrifices in terms of lighting and then how I filmed the B-roll. You need to think ahead and be confident with your decisions. Every second you waste contemplating where you should get your next shot is time you can’t get back. If you try and make every shot perfect, with beautiful lighting, you may end up with only a few shots: not nearly enough when you’re shooting long format shows. Sometimes content is more important than having a nice back light. On the flip side of this, you don’t want to just go with the available light if it happens to be dark, or go hand-held if it doesn’t fit with the style you’re shooting. It is all about finding a compromise between time and quality and often this is a hard thing to do.

I shot this documentary on the Sony F55 and I used the F3 as my “B” camera. Most broadcasters don’t want to deal with Log or large amounts of data. The usual standard is 50Mb/s and anything higher often results in headaches. The whole push towards RAW and 4K is great but the reality of it actually being used and accepted by broadcasters is a long way off. I shot the majority of the vision in this story in a 50 Mb/s in a standard REC709 profile and there was only a small amount of material shot in any sort of log profile. The show doesn’t get graded and only small amounts of colour correction, if any, are done. Shooting in a REC709 space limits your camera’s dynamic range and gives you a more baked-in look. You really do need to get everything right in camera as you don’t have a lot of room to correct the image if you don’t.

When you’re working as a one man band on a long format show there is so much you have to be responsible for. Not only are you taking care of the camera and the lighting but often the audio too. A lot of the time you have two radio mics running, so you’re trying to monitor the levels and quality of the audio as well as focusing on the shot at hand. I try to hide microphones as much as possible but without a dedicated sound operator it can be difficult and time-consuming. Certain types of clothing just naturally make noise or that annoying rustling sound and hiding the microphone works better on certain types of clothing than others. If I’m having sound problems trying to hide them I’ll move them to the outside – when you have limited time you don’t want to be stuffing around with fixing microphones. It also tends to annoy and make the person you’re interviewing or filming uncomfortable as you’re right in their personal space, fiddling around with their clothes. When I do hide them I usually use the Rycote Overcovers and stickies. I find them to work really well in combination.

Why do I use radio mics for my interviews and not, say, a boom-mounted microphone? I am often filming that person after the interview and it saves a lot of time if I already have a microphone on them. Also, a boom would be yet more equipment to carry around and set up. While it would solve the rustling sound issues you often face, it just isn’t practical when you’re working one man band.

As far as lighting goes I used my go-to lights: the BBS Area 48 Soft as my key and the Litepanels Sola ENG kit as my back light and for lighting backgrounds. Both these lights are versatile, easy to set up and can be powered off batteries. I usually light my subject and then, at the end of the interview, adjust my lighting for various other shots. I often find trying to light two people on your own so that it is set up for reversals and two-shots is just too time consuming and compromises your main interview lighting. It would also mean carrying around a minimum of six lights which isn’t realistic when you’re working on your own. In Japan, especially, you are often conducting interviews in very small rooms and to get a nice backdrop for both the interviewee and the interviewer at the same time is almost impossible. I much prefer to focus on the interviewee and then at the end I can move the interviewer into a more pleasing spot. 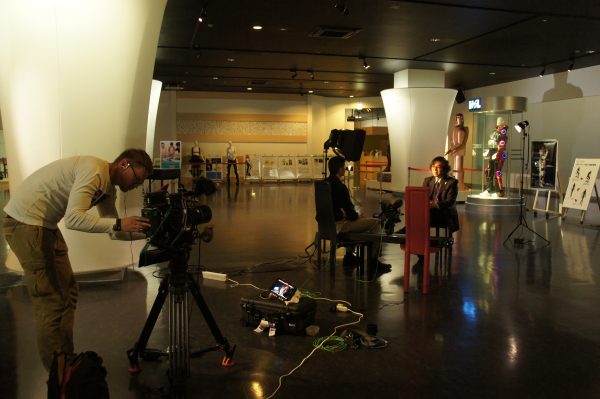 I used the F3 as a second camera for quite a few of the interviews. I would often put it on the Redrockmicro One Man Crew which is a motorised parabolic slider. It is fast to set up and easy to use. You don’t have to attach motors or tripod heads to it, you just take it out, put your camera on and plug it in. It allows you to get some interesting angles. The down side I found is that it does tend to be quite noisy if you make the speed too high. In a very quiet room, if you have it too close, the microphones can pick up the sound. It seems to be more noisy when moving in one direction than the other. I had mixed results when using it for interviews, but put this partly down to me using it for the first time. I did however find it very good for getting various B-roll shots and I use it quite a bit for this purpose.

For other shots I used the Wally Dolly as again it gave me some movement and is compact and very easy to set up. Using a high hat I was able to get some nice tracking and movement shots when I was shooting these small robots.

I’m all for using various ‘toys’ to get different types of shots, but when you have limited time they can become a burden. Setting up a dolly or a slider or any other piece of equipment that is not “core kit” can dramatically eat away at the time you have been allocated. I always ask myself if the shot is really worth it for the time I have. I try not to over-use any of these things but prefer to use them as a complement to the overall story. A lot of today’s shooters get carried away with using toys and forget about the fundementals of film-making: Composition, lighting, and audio.

Shooting documentaries requires compromises, thinking ahead and a lot of hard work. Ultimately it is very rewarding to shoot longer format shows and you constantly learn from doing them. I come away from every shoot with new ideas on how to do something better and what worked and didn’t work – being a cameraman is a constant learning experience. Even after 25 years of shooting I still get nervous before shoots. I think if you walk into any situation feeling overly confident you will end up making mistakes. Keeping an edge is key to improving. Learning to work fast, regardless of which project you are doing, will ultimately make you a better shooter.