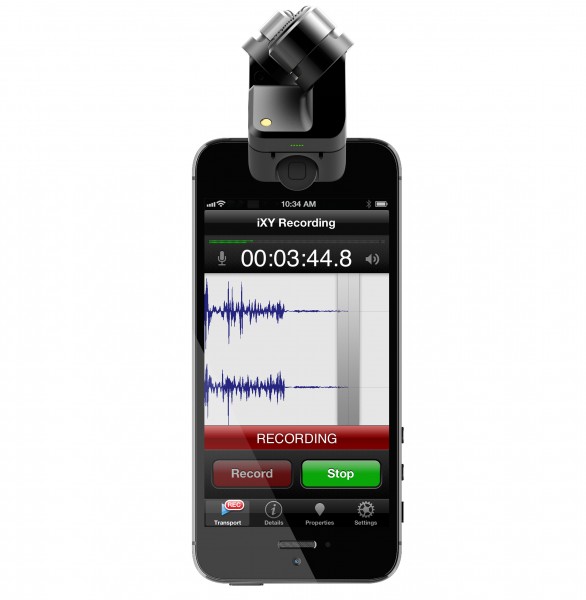 At work I’ve been using the original 30-pin Rode iXY mic with an iPhone 4S to record quick and easy voiceovers for around a year. I find it really handy to have a high quality recorder right there in your pocket. The added ability to FTP or dropbox tracks directly to our editor from the iPhone is really great. Unfortunately, like many shooters, I also upgraded to an iPhone5 and then 5S which only works on with the old iXY using a cumbersome adapter.

Today Rode have unveiled a new version of the iXY specifically for the iPhone 5, 5S and 5C that integrates far better with the Lightning connector equipped phones. The concept remains the same but the design has been updated and makes the combined iXY and iPhone combo feel even more like a single unit.

Like the original, the new iXY features a matched pair of 1/2 inch condenser capsules in a X-Y configuration that allow for stereo recording at sample rates up to 24-bit/96kHz. Audio is recorded using the Rode REC app – the full version of which is one of the few to feature a broadcast friendly 48kHz record ability. A mono recording option is also settable in the app.

The new design fits closer over the iPhone body and attaches via interchangeable rubber mounting clamps. There are specific mounts for the different iPhone models and these also function as a shock mount – reducing vibrations to the mic capsules from the phone body.

A foam windshield is also included and ‘deadcat’ option will be available shortly for even great wind protection. The iXY comes with a handy case and the can be easily handheld or mounted on a camera using the accessory RodeGrip.

The iXY should be priced at around $199 US. They began shipping to dealers this week so should hit the stores very soon.

Full disclosure: Rode is a sponsor of this site.