One Day in Boston – Project Right from Rick Macomber on Vimeo.

One Day in Boston is one of those passion projects I try to do every year. It can be fun and challenging to dig up a good story to shoot all in one day that’s both emotionally charged and interesting to watch. I’ve been participating in this project since it began in 2010 when it was called One Day on Earth 10-10-10. It’s still part of One Day on Earth, which was co-founded by Kyle Ruddick and Brandon Litman.  However this year instead of filmmakers producing stories shot around the entire globe, they decided to concentrate on documenting organizations and individuals as they access opportunity in major metropolitan cities in the United States. Filmmakers were asked to investigate ten specific questions about the future of their cities on April 26, 2014. All of the stories and raw footage will be uploaded and placed in an interactive geo-tagged archive on the One Day on Earth’s websites dedicated to each of those major cities. Our story will appear on the One Day in Boston website. One Day on Earth producers will also be creating a TV series about the future of the American city. 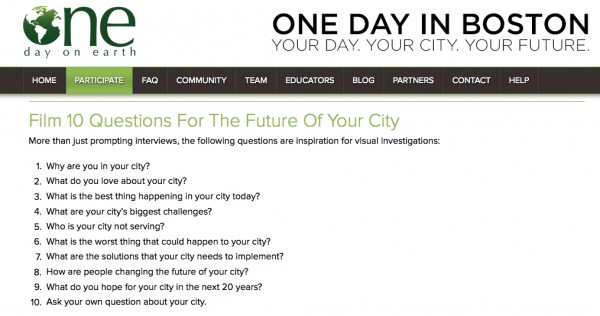 We wear many hats in TV news. To survive we need to have skills as field producers, directors, shooters and editors. The last few times I participated in One Day on Earth I covered them as a “one man band.” This year however, the One Day in Boston project date was scheduled at the same time I was recovering from left rotator cuff surgery. Since I couldn’t physically shoot this year, if I wanted to produce this short film I needed to try to put together a team of Boston filmmakers to assist me – without ever lifting a camera to my shoulder. The call went out on Facebook and Twitter. I got quite a quick response. Todd Mahoney agreed to shoot with my Canon C300 cinema camera. Brian Arata, Daniel Berube and Ron Risman jumped on board to shoot some amazing time-lapse films for us. Mike Magee and Louise Michaud of Pictures From The Sky had just purchased a new Freefly MoVI M5 motion rig and agreed to shoot all our motion shots, some great BTS clips and stills to boot. Jovan Tanasijevik, Frederico Creatini and Emilie Pickering of Above Summit Films offered up a couple of gorgeous aerial shots of Boston.

Our focus this year was on an organization from Grove Hall in the Dorchester section of Boston called Project Right. I don’t want to spoil too much of the story but I will tell you what attracted me to Project Right was the fact that the inner city stuff happening at their office struck a chord with me. They do good work there. In addition to the activities they offer to younger kids, they also work with local youth gangs with their gun buy back program. In addition they offer help transitioning former gang members back into the community and give support to family members. Isabel Torres of Project Right said it best: “We’re just where we need to be. Where the people are.”

Here’s why this particular story pulled on my heart strings. In the nineties I was covering the inner city gang problem, standing by at a local coffee shop with paramedics every night monitoring shootings on the Boston police scanner frequencies. What we covered back then was graphic. My partner and I would sometimes times arrive on scene with paramedics even before police got there. It was disturbing and frustrating for me and my fellow colleagues to be thrust into what had become a media circus and the lead story almost every night. We were not only covering the stories, we were also in a round about way perpetuating more violence by reporters and anchors using the names of the gangs involved when the stories we shot aired. Gangs saw it as getting their props on TV for murdering people – in some instances innocent children struck by stray bullets. This situation was beginning to make me re-evaluate why I got into this business. This wasn’t what I had signed up for when I had decided to become a television news photojournalist. So now you know why I was drawn so intensely to this particular subject matter. Perhaps it was a way to help resolve what I had witnessed and documented through my lens for a good ten year period of my professional life as a news shooter.

Because of the rain, we had no choice but to set up in one small room for the interviews. It was quiet in there and the window light was gorgeous – very soft. The other rooms were filled with kids who were stuck inside doing indoor activities.

Isabel Torres and Kevin Thomas did an amazing job answering some very difficult personal questions about their lives, their families and their city. There were some moments that nearly brought me to tears when Isabel described her father’s addiction to heroin and how family members had to leave him alone in the bathroom with the door locked for sometimes hours at a time. It brought back painful memories of my childhood when I had witnessed similar situations in my own extended family.

Other than not being able to grab the camera and operate it with my own hands, the most challenging and frustrating part of this shoot was the fact that most of the activities that would serve as our b-roll shots for the story were cancelled due to the rain. Remember that One Day On Earth is all about producing stories that happens on a particular day. The same applies to One Day in Boston and all the activities had be shot on the one April day. So the better b-roll we had intended on including in this film was lost due to cancellation. There was suppose to be a gun buy back program set up in the park across the street, among other outdoor camera worthy activities. We had to scramble outside for the walking MoVI motion shots when the rain showers abated for brief periods of time.

We had some nice motion in the playground with Isabel and her daughter. We also got a nice low angle shot of all the kids running through the hallways of Project Right. Later in the day Todd and I had to jump in the car and shoot lots of moving shots of the Grove Hall neighborhood and downtown Boston out of the passenger side window on the bumpy pothole filled streets of Boston, all of which needed to be stabilized with Warp Stabilizer in post production.

The only organically stable shots we had from the car came from the GoPro mounted to the hood, but because of scheduling issues, most of those were shot collected during downpours! If it had not been for the additional time-lapse clips and the breathtaking aerials we added, the story would not have been as effective in my opinion. This was really a true collaboration of many Boston professionals.

For the interviews and some interior B-roll we used a minimally rigged Canon EOS C300 and the awesome Sigma 18-35mm f1.8 lens. A Canon 5D mkIII with a 24mm f1.4 was used on the Freefly MoVI M5.  The MoVI worked like a champ. Speed was important working outside with all the intermittent rain. Having that rig all set up and ready to go was a dream. A GoPro Hero 3 Black was mounted on the hood of the car for some driving shots. In the skies Summit Films used one hex and one quadcopter, also equipped with GoPro Hero 3 Black cameras and stabilizing gimbals.

The only additional light used to supplement the gorgeous window light was a Switronix Torch LED BOLT for a little bit of fill. The time-lapse shots were done using Canon 5D mkIII cameras as well as a Canon 7D with 70-200mm f2.8 and 16-35mm f2.8 L lenses, eMotimo TB3 Black and Dynamic Perception Stage One Dolly along with this new must have piece of kit: The Xsories Weye Feye Wi-Fi device that can monitor your camera images from an iPhone or iPad.

I must give the time-lapse and aerial photography teams lots of credit for standing outside in the cold rain – especially those time-lapse guys who stood outside for hours! Thank you so much! I believe this was an important story to be told. It is organizations like Project Right that are unpretentiously educating, saving and re-building inner city communities with little public recognition. Thank you Project Right and to One Day on Earth organizer Cecily Tyler for pointing me in their direction.

DP/Director and photojournalist Rick Macomber is owner of Macomber Productions. He is the winner of four prestigious Emmy Awards, nominated for eight Emmys in Videography and Editing and ten time first place winner for the Boston Press Photographers’ Association. His coverage of the Cambodian refugee camps in Thailand for CBS Boston has won him a prestigious Boston Press Photographers “Best of Show” award. Rick has interviewed three US presidents and countless Hollywood and sports celebrities and has covered stories around the globe such as the horror of 9-11 from Ground Zero in NYC and the 50th Anniversary of D-Day from the beaches of Normandy, France.

Rick Macomber is a four time Emmy Award winning filmmaker from Boston who owns Macomber Productions and is also a photojournalist with CBS in Boston.