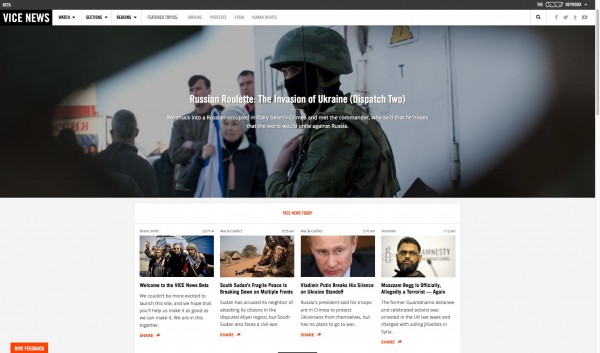 Love it or loathe it, the VICE Media foray into the news world has begun. The VICE News beta website officially launched on March 3 2014, after a pre-launch period where a lucky few thousand eager viewers who had signed up early were given access.

Media outlets like POLITICO, Fortune Magazine, Nieman Journalism Lab, and The Guardian gave our startup’s launch ample coverage with many commentators are making predictions about its impact on the news landscape. The coverage points to a news organization where “video works”, but what does the launch of VICE News mean to the community of news and documentary shooters?

I’m a member of what could be called “Generation 5D” in the news shooter world. I’m in my late twenties and only started my career in video a few years ago. I taught myself to shoot video on DSLRs and developed my current addiction to the craft – helped in part by the low barriers to entry afforded by such cameras.

For me, VICE News represents a new trajectory for a generation of young shooters who came of age among a world of DSLRs from Canon, Nikon, and Panasonic. It is more likely for Generation 5D to have cut our teeth via self-funded projects on YouTube or Vimeo. We have cut out the years spent at a local network affiliate, before working the way up to a national or international broadcast outlet. We use cellphone signals instead of satellite trucks. Our cameras are smaller and our backs don’t hurt quite as much.

As a producer and shooter for VICE News I do much of the same thing any independent visual journalists or documentary shooter does on an average working day – just with a bit more support. I research, pitch, produce, shoot and script nearly all my own stories. What differs is the support network. Unlike the echo of a freelancer’s empty room, I work with a team of associate producers and editors. They help keep me focused, funded, and fed when I’m on the road. When I’m not producing or researching my own stories I’m out shooting and field producing for other colleague’s projects on an ad-hoc basis.

Under the VICE News banner I hope to push my work towards a higher standard of visual news journalism. The bar is set by programs like Al Jazeera’s Fault Lines. Think: current affairs programming where the level of cinematography matches the breadth and depth of reporting, paired with grit and energy of youthful correspondents. The gateway for a young shooter into the news or documentary world has diversified and VICE News epitomizes that change. While this “youth media” brand may not provide many opportunities for the older generation, we all can find solace that one more media organization is inspiring young people to pick up a camera—of any kind—and tell stories.

This entry represents the first of many pieces I will be writing for Newsshooter.com from the perspective a younger, greener and more budget conscious news shooter.

Spencer Chumbley is a producer and shooter for VICE News in New York City. He previously was a fellow at Al Jazeera’s Fault Lines. Follow him on Twitter at @SpencerChumbley