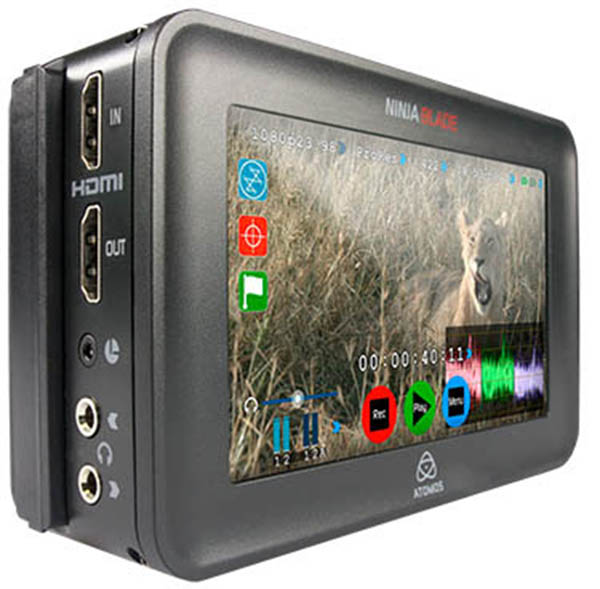 Atomos have updated their popular Ninja HDMI external recorder. Essentially a HDMI version of the SDI Samurai Blade model, it features the same hi-res screen and advanced functions. Recording straight to off-the-shelf SSD media the Ninja Blade can record in Apple ProRes and DNxHD at 1080 HD.

Just like the Samurai Blade, the Ninja Blade has a lovely 1280×720 IPS display and a raft of tools such as waveform, vectorscope, zebras, false colour, audio monitoring and black and white mode.

I’ve been running a Samurai Blade on my Sony FS700 rig for several months now and found it to be extremely reliable. The unit is lightweight and small enough to sit unobtrusively on the top handle of my setup. The Samurai can also be used with HDMI cameras by using an Atomos Connect SDI to HDMI converter, but the Ninja Blade will be a better solution for DSLR and Prosumer video cameras which only have HDMI outputs.

Check out our technical editor Matt Allard’s review of the Samurai Blade if you want a better idea of the Ninja Blade functions:

Here is the release from Atomos:

“We are extremely proud to work with all the major camera companies, especially technology leaders from Japan, which gives us a unique advantage over our competitors.” said Jeromy Young, CEO and Founder of Atomos. “And I am especially pleased to be able to announce a product that is also ready to ship, which is something of a rarity in this industry these days. With the Ninja Blade we are able to deliver fantastic, professional-grade monitoring functionality and recording codecs straight from the multitude of DSLR’s, mirror-less and HDMI video cameras. And we can deliver it now, not in 6 or 12 months’ time.”

The Ninja Blade takes advantage of low-cost, modern technology by utilizing HDMI-capable pro-video and consumer camcorders, as well as DSLRs. Many features from Atomos are designed with real productions and real situations in mind, to create smarter workflows, keeping the highest quality but also keeping running costs low. The Ninja Blade was designed with a long battery life. Atomos’ unique Continuous Power technology (patent pending) means that you never have to interrupt recording to swap batteries.

The new Ninja Blade features a stunning 1280 x 720 SuperAtom IPS touchscreen, at 325ppi 179-degree viewing, 400nit brightness and multi frequency (48/50/60Hz) operation depending on video input, giving super-smooth monitoring and playback. Every screen is calibrated to SMPTE Rec 709 colour space and a D65 white point with 100% gamut from factory. On-the-fly screen calibration is built into every Ninja Blade, so you are always accurate in any shooting environment.

Pricing and Availability
The Atomos Ninja Blade is now shipping for 749 EUR and 595 GBP (excluding tax and delivery) and will be available through the Global Distribution.