It’s been said that the best way to learn is by teaching. Recently I made a tutorial on shooting B-roll for the public media education site transom.org – this gave me the chance to scrutinize a lot of my shooting habits and routines.

At Alaska Public Media we shoot and edit one minidoc each week for the PBS Digital Studios series “Indie Alaska”. Often we have a lot less time with the subject than we wish, and may have to go into a shoot without knowing much about the scenario – I’m betting this is true for most doc shooters.

To complicate things further I prefer to tackle B-roll first before ending the shoot with the interview. That’s because the interview can be emotional for subjects and wear them out. Sometimes we just have to shoot a ton of B-roll without knowing precisely what the story will be or what should be covered. 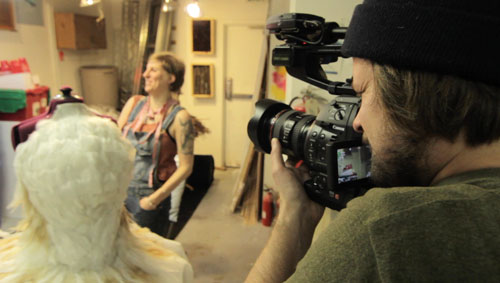 This makes efficiency in shooting B-roll extremely important. The challenge is to get a variety of shots, at different angles and focal lengths, using different support rigs and camera movements – while still being prepared to shoot something important and unplanned. It is really fun but makes every doc shoot a kind of rush. 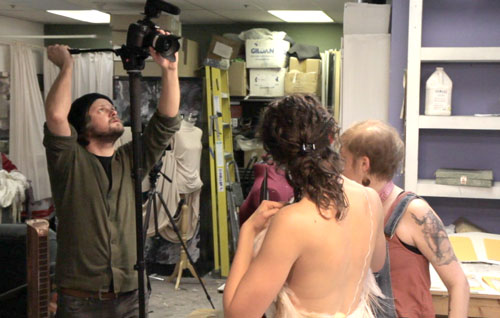 All the tips from the video are written out in my transom.org post, but below are the highlights that I surprised even myself with – things I do, but didn’t realize until I watched myself shooting:

• Minimize lens changes – take as many wide shots as possible before moving in with your medium zoom lens.

• Anytime you frame a shot, take a moment to move out of the frame and then move back into it with a pan, tilt, rack focus, or handheld action. This makes editing much easier. Also when you’re handheld you should experiment with moving your entire body slowly to get slight movement, even from static shots.

• Avoid conversation with your subject. Shots of them talking to you (even if they’re looking elsewhere) are hard to place over their interview audio. Plus, the more they forget you’re there, the better.

• And this is something I always struggle with – if you see something happening that may not happen again, quickly focus and shoot the action at whatever imperfect exposure or focal length you might be in, at least for 5-10 seconds, before adjusting your camera settings. I can’t count the number of times I wish I had an underexposed shot that was still just about usable, over a shot where I’m stepping up aperture and ISO or fumbling with the zoom.

For the video below it took about two hours for me and my partner-in-crime Travis Gilmour to shoot all our shots and interview our subject. I later went back and shot about fifteen minutes more of the subject at a cafe, which allowed me to extend the video into an episode for “Indie Alaska.” Sometimes we doc shooters have less time, sometimes more, but the goal is always to be as efficient with B-roll shooting as possible.

Slavik Boyechko is a documentary filmmaker and Digital Media Director at Alaska Public Media, where he develops TV programs and shoots and edits the PBS Digital Studios series INDIE ALASKA. He maintains a blog at alaskavideoshooter.com and you can follow him on Twitter @akvideoshooter.

Slavik Boyechko is a documentary filmmaker based in the Pacific Northwest, USA, and runs Digital Filmmaker, a blog about filmmaking equipment.