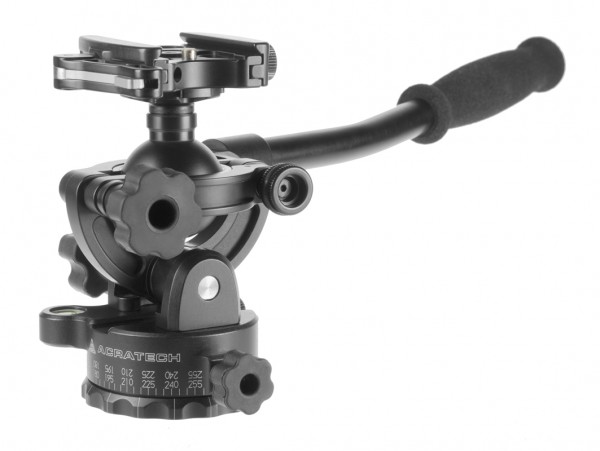 Acratech are a US company that specialises in ballheads for photographic use. They also make an excellent range of levelling bases which can be used with photo tripods to make them function more like a video tripod. I’ve used one of their levelling bases on lightweight Gitzo carbon fibre legs for some years now. It has been very durable and great for a second or third camera on an interview.

Earlier this month at PMA in Las Vegas Acratech launched a ballhead designed for still and video use. The Video Ballhead Model #7100 is fluid-dampened and offers both pan and tilt movements. Acratech claim the ball of the head has fully adjustable tension control, but it is unclear how this affects the video movements. The whole thing looks rather ingenious and I’m curious to see how well it works. From its construction I’m assuming it only provides smooth motion with moderate payloads but it could be really good for smaller cameras like the GH3 or 5D. It might suit multimedia journalists and photographers wanting a dual-purpose head that doesn’t weigh too much.

One feature I do like is the Arca-Swiss style quick mechanism that is built into the top of the ballhead – no more additional adapters to screw onto the top of your tripod head. It should work with popular plates like those from Kessler and Zacuto but again this needs testing.

Pricing is set at $599.95 US which is certainly not inexpensive – you could get a compact Manfrotto video head and a good photo ballhead for the same price – but if you want an all-in-one solution, the Video Ballhead Model #7100 certainly bears investigation.