The giant Consumer Electronics Show (CES) in Las Vegas always throws up some interesting items for the professional user.  While the show is mainly aimed at the consumer market Sony has announced a few products that are look very appealing to news and documentary shooters. 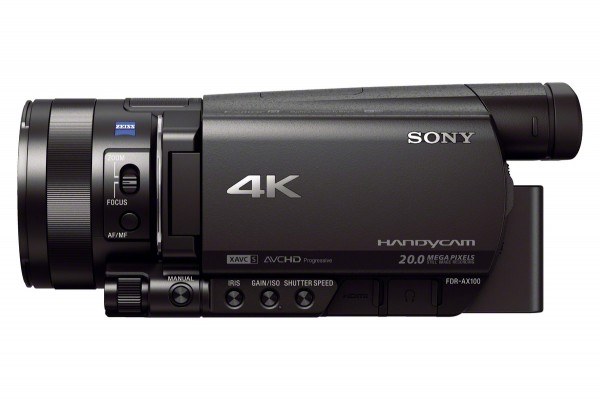 4K FOR 2K
Last year at NAB Blackmagic Design announced their 4K Cinema Camera for $3K and it attracted a lot of interest (although it is still to ship).  At CES Sony have surprised by announcing the FDR-AX100 , a compact handheld camcorder that offers 4K video resolution using a 1″ 20MP sensor (14MP in video mode) and a 12x f2.8-f4.5 lens. It usefully features built in ND filters and records at up to 30fps using Sony’s XAVC-S codec XAVC-S (the consumer version of XAVC that is found on the F5/55). This means the camera is limited to 3840×2160 Quad HD. The FDR-AX100 is quite a different camera from the 4K Blackmagic Design Production camera and not worth direct comparison, but the overall trend towards cheaper 4K is clear.

For Sony I believe they are making more affordable 4K cameras in order to help push 4K TV sets and distribution -there is no real point trying to sell someone a 4K TV if there isn’t any reasonably priced consumer based devices to capture 4K material on.  In the near future I think we are going to see just about every camera released being 4K capable.

So where does the FDR-AX100 fit in for News/Documentary shooters? I see it being a good B camera for people who want a back up solution for their current 4K camera. As a “A” camera in a professional environment it would have limitations but also a some positives.

On the down side: while it does have a very impressive zoom range 29mm-348mm (full-frame equivalent) it does not have a constant aperture like the Sony’s own RX10.  It also only features a 3.5mm mini jack for audio in and no XLR inputs as standard (this can be rectified by buying an optional XLR adaptor but these are quite expensive).  The 1” chip may be seen by many as a disadvantage too but I think it is a reasonable size for a camera like this. Another disadvantage is having to choose between having the ring on the lens control aperture, exposure or zoom – you can’t set manual focus and aperture at the same time. This is something of a throwback to the once popular Sony A1 of yesteryear.

As far as the positives go there are plenty – the main one being price.  4k for $2000 US is impressive.  Also the fact that it is 4K means Sony can’t use a low bitrate codec like AVCHD for recording.  Instead they use XAVC-S. giving this camera a high quality codec that can still be recorded onto cheap media like an SD card.  I hope this is a sign of the future that we will see XAVC-S being implemented into more cameras.  Sadly if you want to record regular HD you are still forced to use AVCHD.

It also features built in Neutral density filters which is fantastic in a camera at this price point.  There is focus magnification but it is unclear whether there will be peaking or zebras.  It also features a flip out screen and a high quality 921K OLED VF which is a plus. You can record up to 120fps, but to do so you must drop resolution to 720p.There is a night shot feature as well as manual controls for white balance, gain and shutter speed. What will be interesting to see is how good or bad the servo zoom control is.  From my experience a lot of the lower end Sony camcorders have had horrible servo zooms that weren’t smooth to operate.

The smaller size of the camera is also a plus as it could used just about anywhere, in any situation.  With the ability to be able to control and remote view the image (with a delay of course) using an app on a smart phone or tablet you could remotely place this camera with its small size in a lot of locations and just leave it (ed -assuming it isn’t going to be stolen!).

This camera with the optional audio module could make for a nice protest or war zone camera. The small size, the ability to post zoom and stabilise your image if finishing in HD, as well as having a broadcast friendly codec capable of 50Mb/s delivery all look good.  This may not satisfy the most stringent HD broadcasters standards, but for a lot of other networks it will be fine.

4K is definitely coming whether you like it or not. For this camera the proof will be in the pudding once it’s out in the real world.