The last Sony F55 and F5 firmware update for 2013 arrived today, just a few days after Christmas.  The eagerly awaited version 3.0 adds some very exciting features as well as some less earth-shattering ones that are great to have nonetheless.

The most exciting one for me is the 2K centre crop mode. This is a feature that has been seen in other video cameras before but is new to the F5 and F55.  What it allows you to do is just record the central part of the camera’s sensor when shooting 2K in XAVC HD and HD in MPEG HD or SR codecs. Because the sensor is 4K to begin with, the cropped image still has enough pixels for full 2K or HD quality. The crop is about 2x compared to the original S35 image.

This mode was really designed to allow the use of old Super 16mm or broadcast B4 2/3″ lenses on your camera (these may still need an optical adapter to cover the frame mostly at wider angles).  It is, however, not limited to those types of lenses.  Any lens, whether it be PL, Canon, Nikon etc, will work.  For news, documentary and wildlife shooters this is a huge plus. The ability to have a virtual doubler on any of your lenses creates a lot of flexibility. The even better news is that there is no loss of light, quality or sharpness because it’s just cropping the 4k sensor and using a part of it. (If you use a B4 broadcast lens with the range extender engaged, or an optical adapter, you will of course still lose some light.)

However, compared to the un-cropped image there may be more noise and some optical defects that the lens has may be more obvious (although distortions and aberrations in the edges of the frame may actually be lessened as they are cropped out).

Other key features include the ability to name your files – the lack of this feature was a pain before the new firmware.  There are also finally user programmable look up tables (LUTs) as well as monitor LUTs too. This makes working in raw or with S-log profiles much easier.

Slow and Quick Motion has been expanded to work with 4K XAVC 1-60fps in 1 frame steps.  In 2K and HD modes both the F5 and 55 can record up to 180fps (in NTSC) and 150fps (in PAL). There are also a ton of other high speed frame rates in small increments that can be recorded too. A new colour gamut and log curve have been added: Slog-3 and S-gamut3 Cine. These will only work in Cine EI (exposure Index) mode. The camera will record at a fixed ISO and you will be able to monitor exposure changes in your viewfinder to see what the corrected image will look like in post. 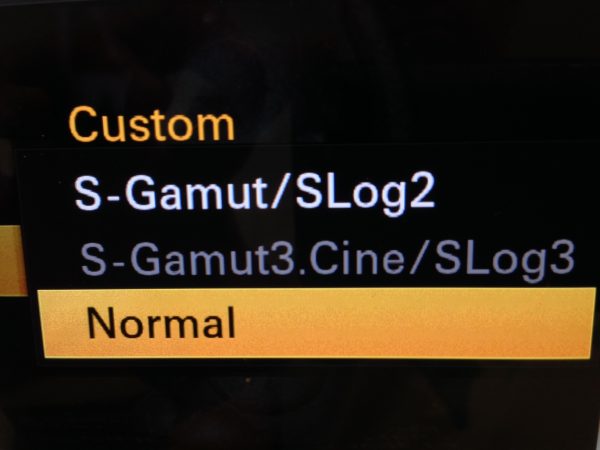 For owners of the Sony FZ 18-252mm zoom lens there is now the ability to use auto iris and and also control the lens through a broadcast zoom rocker controller by using an optional (not inexpensive) Sony controller box.

There are a ton of other features in the firmware, a full list of which can be found on Sony’s website.