Marshall Electronics, who are best known for their broadcast monitors, have released a very interesting new product.  The CV500-MB is a low cost HD-SDI connected micro camera for use in a wide variety of situations and environments.

The CV500-MB is aimed squarely at the broadcast market where the availability of inexpensive small cameras that feature an HD-SDI output has been lacking. Hooking up to external recorders or switchers the intended uses are as crash cams, in-car, POV, undercover and remote monitoring.

There is no internal recording. This may sound strange to some people but the ability to record a high quality signal to the codec of your choice makes a lot more sense in a broadcast environment.

Marshall are not aiming the CV500-MB at the average GoPro user, but for broadcasters it does offer the ability to be mounted in a lot of places where a GoPro can.  The HD-SDI output is very important in the broadcast world (ed – although there are plenty of TV stations using GoPros to do similar things using HDMI to SDI converter boxes).

The camera uses a tiny 1/2.8″ Sony Exmor 2.2MP CMOS sensor and a high definition prime lens. Don’t expect a large sensor like image. It comes supplied with a 3.7mm 3MP lens.  The lens is according to Marshall very good in low light conditions.   According to their specificationsas it can operate in 0.5Lux lighting conditions.  How this actually performs in the real world will be interesting to see.  Paper comparisons with the GoPro Hero3+ aren’t possible as GoPro doesn’t publish Lux figures for its cameras. We will have to wait and see how the two compare. 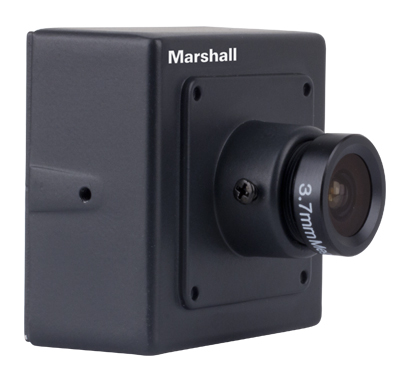 The lens is interchangable and Marshall offers a variety of miniature HD lenses to suit your application.  There is a 2.9,mm, 4mm, 5.6mm, 6mm lenses that are all f2.  Also available is a 12mm microscope or close up lens that is also f2.   Other lenses such as pinhole designs are also available.  Now the camera itself is PAL/NTSC switchable and  is capable of recording 1920x1080i/59.94.  One major catch is that if you want a different frame rate or want to shoot progressive you have to buy a specific model. Models available include the CV500-M which shoots 1080p/30 and 720p/60, and also one that shoots 1080p/60 (3G-SDI). Each model can also shoot in the coinciding PAL frame rates.

The camera offers an Automatic Gain Control (low/mid/high), Automatic white balance as well as white balance set (manual/indoors/outdoors), a digital zoom and the ability to switch between colour and black&white.  One of the huge features for me is the ability to manually set the shutter speed, something that has been missing on the GoPro since day one.  Another exciting feature set is the ability to do a wide range of exposure control.  There is also the ability to shoot IR which can come in very handy.  For a full list of all the features go to their website www. marshall-usa.com

The HD-SDI connection is via a breakout cable which also has a composite output and supplies 12V power to the camera. 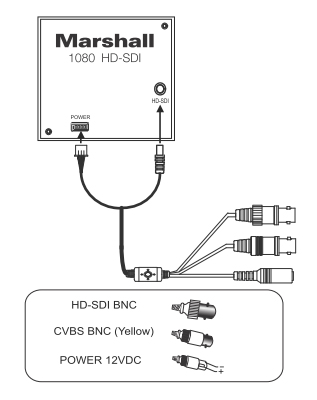 While it lacks a lot of the features of a GoPro  it makes up for it with its own feature set. On paper at least it sounds like a very good solution for people working in broadcast.  There is no mention from Marshall of any mounting options, cages or underwater housings.  I am hoping to get one to test out soon as that is the only real way to judge the actual optical performance and low light ability.

This from Marshall:
”The  CV500-MB HD-SDI Miniature Camera provides  full HD 1920x1080i/59.94 video for filming all types of Broadcast applications such as Reality TV, Extreme Sports, Documentaries, Stunt Filming, Hidden Cams, and others. The CV500-MB is only 1.5” square, enabling unobtrusive placement or concealment.

CV500-MB is supplied with a 3.7mm 3MP Prime HD lens. Marshall offers a variety of other miniature HD lens options to accommodate specific conditions in the field. This offers greater flexibility to get the optimal field of view, depth of view, and distance to scene.

At less than 1½ inch square, CV500-MB can be integrated into reality shows, green rooms, helmet cams, stunt cars, dash cams, remote transmitter packs and other small areas where other cameras would not fit or would be obtrusive.

Marshall’s CV500-MB HD-SDI Mini Camera comes programmed at a resolution of 1080i/59.94 for Broadcast applications. Other models are available in 1080p/60 (3G-SDI), 1080p/30, 720p/60, 1080i/60 for applications in Security, Audio/Video, Robotics, Industrial, and OEM. All versions have the ability to switch between PAL/NTSC, and offer a 2nd simultaneous video stream through a CVBS (BNC) output cable  .

“The CV500-MB is capable of capturing difficult and compelling shots by going where other cameras can’t go. With the prevalence of reality and documentary television, a tiny camera with these capabilities is invaluable to today’s broadcasters and filmmakers,” said Leonard Marshall, CEO of Marshall Electronics.