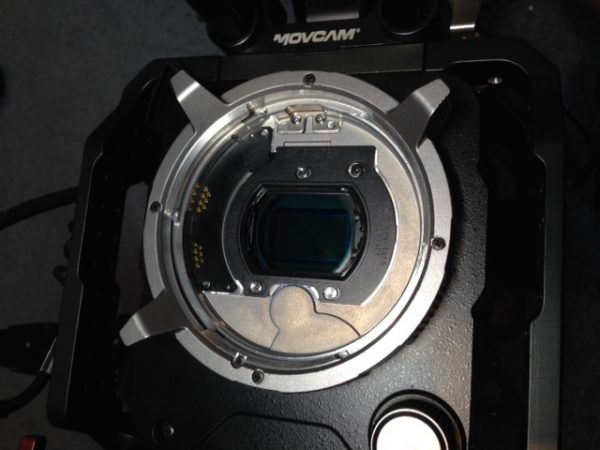 Not long ago Sony released the CBK-55F2K optical low pass filter (OLPF) for their F5 and F55. It is a user-changeable filter and can be installed in a matter of minutes by replacing the existing filter that sits in front of the sensor. The OLPF can be swapped back and forth and is not designed as a permanent replacement for the existing filter. So why would you need this OLPF? Here is a little insert from Alister Chapman over at www.xdcam-user.com. Alister is in my opinion THE go to guy for any sort of technical or user operation questions when it comes to Sony cameras.

Alister wrote: “Sony’s FS700, F5 and F55 cameras all have 4K sensors. They also have the ability to shoot 4K raw as well as 2K raw when using Sony’s R5 raw recorder. The FS700 will also be able to shoot 2K raw to the Convergent Design Odyssey. At 4K these cameras have near zero aliasing, at 2K there is the risk of seeing noticeable amounts of aliasing.”

One key concept to understand from the outset is that when you are working with raw the signal out of the camera comes more or less directly from the sensor. When shooting non-raw then the output is derived from the full sensor plus a lot of extra very complex signal processing.

Aliasing shows up in images in different ways. One common effect is a rainbow of colours across a fine repeating pattern, this is called moiré. Another artefact could be lines and edges that are just a little off horizontal or vertical appearing to have stepped or jagged edges, sometimes referred to as “jaggies”.

So is this a real problem Sony are addressing? Or is it just another tool for you to create a different look with your camera? I was interested to see for myself. Since getting my F55 I haven’t really seen any bad moire or aliasing when shooting 2K in HFR, or when shooting 4K. I’m sure there is some moire and aliasing – but the camera doesn’t get anywhere near as bad as what we are used to from most DSLRs. I remember how horrible my Canon 7D used to look in 720/50p.

I got the filter in Japan. At close to $900 US it is not cheap! It is a tiny component and looks very fragile. A word of warning – be very careful when handling this filter and installing it as you can easily get dust or scratch marks on it. When installing it be in the mindset that you are a brain surgeon and that any small slip could be fatal. It really isn’t that difficult to change but be very careful. You unscrew one tiny screw and slide the filter gently to the right. You then slide the CBK-55F2K filter in and carefully screw it back in.

I took my F55 down to the beach after installing the filter and filmed some high speed material in 2K raw to the Sony R5 recorder. My first impressions were that it softens the image quite dramatically. Now this produces a more organic looking image just as Sony say. The down side was that I found it very hard to focus. Even with the peaking on and using the OLED EVF I really struggled.

I had previously been shooting down at my favorite spots a day earlier without the CBK-55F2K fitted. I had also shot 2K raw at HFR as well as 4K raw. I didn’t see any moire or aliasing in anything I shot.

The above video shows a non-sharpened F55 footage using the CBK-55F2K and then the same footage again after some sharpening added.

I did do some more rigorous moire and aliasing tests: shooting fine lines and patterned clothing etc. I found there to be a small amount visible on the F55 footage when shooting HFR in 2K raw. There was also a very small amount in 4K raw but you can barely see it. When I switched in the CBK-55F2K filter I did notice an improvement so it does work – its just that the difference is not always that obvious. I’m not a super-technical scientist and I prefer to judge images with my own eyes and years of experience as a cameraman. An image may be technically flawed but if I’m not seeing it then there is a great likelihood that the audience isn’t either. Also ask yourself how many times are you going to be shooting in situations where you may see aliasing or moire? For me personally it is not a lot and as I said before I have never noticed a problem. If your whole work life is spent shooting Tartan clothing then this filter is probably for you!

As far as Sony’s claimed “More organic look” goes it does have some merits. I found the F55 produces really nice imagery when coupled with the R5 raw recorder. The CBK-55F2K does take that image and soften it up even more and it does look quite nice to my eye. It is very easily sharpened up in post can see myself using it for certain situations or shoots, but I didn’t find it to be a piece of equipment that you absolutely had to use if you wanted to shoot 2K raw at HFR or 4K raw.

FS700 users are out of luck – as far as I’m aware there is no plans at this stage for a similar filter.