Sony has just released Version 1.20 for the F5 and F55 as part of there ongoing firmware roadmap.

It enables a couple of very significant things, the first being the ability to record the SR codec in 3 different varieties.  These are SStP SR-SQ 444  RGB at 440Mbps, SR-SQ 422 at 440Mbs and SR-Lite 422 at 220Mbps.  To put this in perspective, the SR-SQ will actually give you less recording time than the XAVC 4k (which is around 330Mbps). This SR file recording is derived directly from HDCAM SR, which since 2007 has been the industry standard recording for most episodic television series. With the new SxS Pro+ cards Sony finally have affordable and fast enough media to deal with SR. This is a major feature as far as I’m concerned; being able to record 444 RGB internally really is impressive and I can see this being widely used by F5/55 owners.  An added benefit is that a lot of post houses are very familiar with the SR workflow.

The second exciting feature is wi-fi remote control for the camera. If you own a F5/55 you will have received a small USB dongle that you can insert into the wi-fi slot located right next to the EVF connector port on the camera, behind a small removable panel.  Once you have inserted the dongle, make sure you turn your camera off and then back on, or the camera won’t recognise it. Then go to the System page in the menu, go to wi-fi and enable it.  Once you have done that, you can simply locate the camera on your web browser (computer, iPad, iPhone etc) and connect to the network. It will ask you for a password which you can find located in the wi-fi menu on the camera. Enter the IP address 10.0.0.1 into your web browser and it will ask for a username and password. The user name is: admin.  The password is: pmw-f55 (or PMW-f5 if you’re using the f5). A screen will come up allowing you to change such things as ISO, shutter speed, white balance and gamma settings.  You can also start/stop record the camera and turn on and off your assignable keys.  There is also the ability to adjust white and black balance as well as full playback control of the camera. Live view is not supported.

I found it to be pretty responsive, but just a word of warning:  If you turn the power off on your camera you need to restart the wi-fi. This is a bit of a pain if you’re changing batteries etc but nothing to be too concerned about.

Other features included in the Version 1.20 firmware are:

Cam ID and Reel # naming on SxS cards. This allows you to name a clip on the card and if you’re using the R5 recorder at the same time the naming convention will automatically apply to the clip on the RAW recorder as well.

Several other small bug fixes and new firmware for the R5 recorder are also included.

The upgrades are a good start to finally getting some long-awaited features activated on the F5/55, though I’m sure many people would have liked to have seen the high frame rates in this release instead of, say, SR. Sony are at least listening to owners of these cameras and new features are being added all the time. It is good to see a steady stream of improvements with firmware releases and I believe this is the direction the industry is moving in. I think the days when you bought a camera and that was as good as it was ever going to be are numbered. 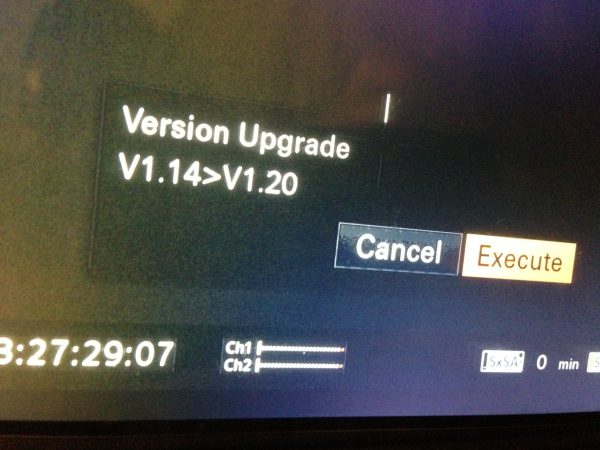 A note of caution: After upgrading your camera to version 1.20 you need to do a full reset on the camera, so please remember to save your file and camera settings to a card before doing the reset.

The firmware can be downloaded here: