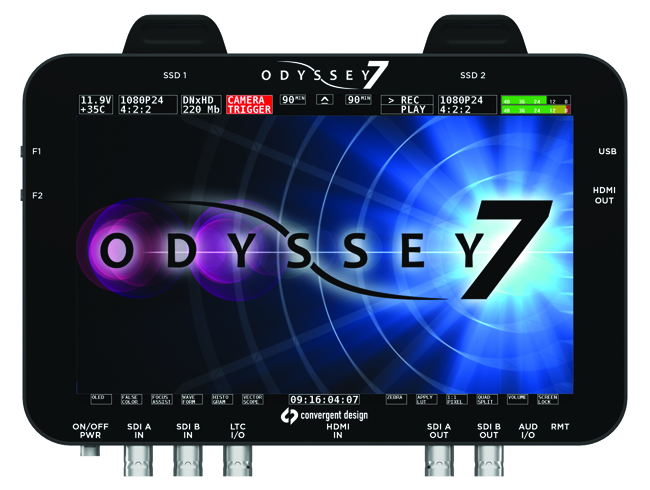 Convergent Design are probably best know amongst news and documentary shooters for their diminutive Nanoflash external HDSDI recorder which came out a few years ago. That product was revolutionary as it made it possible to use smaller cameras like the Sony EX1 and still achieve the higher bitrates specified by international broadcasters for HD programming.

Several other manufacturers have attempted this before but the monitor side has always been a compromise and not state of the art.  The new Odyssey 7 and 7Q feature a 7.7″ OLED monitor with a 1280×800 RGB pixel array and a wide color gamut. The contrast ration is 3400:1 with true blacks and very little motion blur according to the Convergent.  There is also Bluetooth support via a simple remote control using iPhone and Android apps.

The Odyssey 7 is sold as a monitor only and everything else is an option. By doing this Convergent Design have given you the option to buy it as a stand alone monitor and then upgrade (via internet) if you need recording options.

Also included are all the bells and whistles you would like to have on a modern monitor: Waveform, RGB Parade, Zebras, 1:1 Pixel, Focus Assist (Peaking),Vectorscope, Histogram, LUT Support, False Color and more. These are pretty impressive specs for a stand alone monitor let alone a monitor/recorder.

I have not seen this device in the flesh yet – but I expect the display to be good given Convergent’s track record. To put it into perspective though the Odyssey series has the same resolution as the Small HD AC7 OLED which has a 8-bit color depth.  The competing Sound Devices PIX240i has a screen resolution of 800×480, as does the Atomos Samurai. It will be interesting to see how it compares to other OLED field monitors.

The Odyssey 7 will retail for $1295 US – which would be a great price if you were just getting a stand alone OLED monitor – but your getting much more than just a monitor.  The Odyssey 7 is a state of the art external recorder than is capable of supporting a wide range of recording formats including Avid DNxHD (up to 120fps), uncompressed HD/2K RGB 444 (up to 60p), 2K/HD Raw, ARRIRAW (4:3 and 16:9), and Canon 4K Raw. Importantly all the recording formats are extra-cost user installable options.

New custom 2.5″ highly-reliable “Server-Grade” solid state drives support read/write bandwidths in excess of 500 MBytes/sec per drive, enabling Canon 4K Raw at 60 fps. There are two drive slots which be configured in spanning mode (to double record times), RAID 1 mode for auto-backup. They can also be configured in RAID 0 mode for data-rates in excess of 1 GByte/sec. So you can actually dual record to both SSD drives or choose to use both of them independently.

The media will come in 240, 480 and a whopping 960GB sizes.  Prices are yet to be announced but Convergent Design has told me that they will be competitively priced. I don’t expect this media to be cheap by any means.  Server grade SSD drives that can handle the sort of read/write speeds required for 4k are going to be expensive.  All you have to do is look at the price of RED recording media or even Sony’s SxS cards to gauge a likely price.

You can either buy individual codec options or interestingly you can rent them online for individual jobs instead – something I have never seen before. The optional codecs and features can be added anytime, from anywhere (with internet), via a secure online purchase from the Convergent website. You obtain an activation key, provided at the point of purchase and you’re up and running! Rental of recording options (ARRIRAW, for example) provides many benefits including no shipping hassles, no insurance certificates, and none of the scheduling issues of traditional rentals. Recording options are rented in 24-hour blocks, with unused blocks available for future use.  This is a very clever solution.  If your a DP or production house that suddenly gets a request to use a certain camera or format you can just rent the appropriate recording format for the time you need it.  Bravo Convergent Design, Bravo.

As a user I am not being forced into paying for things I may not use – but the option is always there. Prices for the renting and outright purchase of the recording formats is likely to be announced prior to Cinegear which is at the end of May.

Along with the Odyssey there is also the Odyssey7Q.  It utilizes the same 7.7” OLED display as the Odyssey7. While the Odyssey 7 is intended for single stream support (up to 4K Raw), the 7Q adds additional bi-directional HD-SDI 3G ports. The 7Q’s extra processing power enables certain extra cost options to support: four stream HD/2K monitoring (quad-split) and compressed recording, 4K video and high-speed (120fps) support, and simultaneous recording of proxy (DNxHD-36) and Raw video.  This means the 7Q is also ideal for environments where you would like to simultaneously record up to 4 separate streams of HD or 2k material. The price of the Odyssey7Q is unannounced, but Convergent say it will be competitively priced and use the same 2.5” premium media as Odyssey7. The Odyssey7Q will be available in quarter 4 of this year. The Odyssey7 will begin shipping in July.

A wide range of optional battery accessories, mounting options and sunshades are planned to support both products. Odyssey7 and Odyssey7Q will be on display at NAB and the Dslrnewshooter team will be there to check it out.

This a really innovative product and I look forward to doing a full review on it.  Combining a professional monitor with a wide range of recording options and the ability to just rent them as needed is a revolutionary step in the right direction.  I have been looking for a device that turns two devices into just one, while doing both jobs equally well – lets hope this is it.