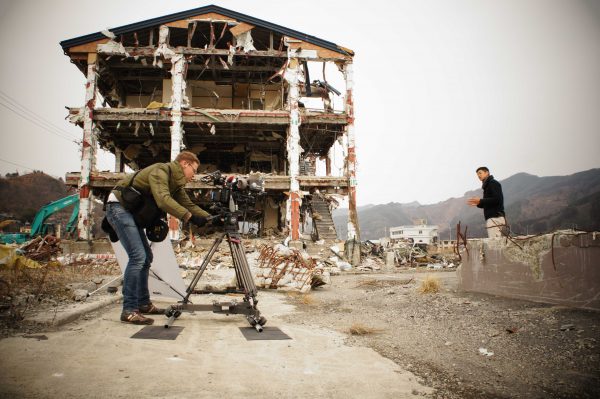 Two years ago on the 11th of March a devastating earthquake and tsunami ripped into the north east coast of Japan.  It killed more than 20,000 people, totally destroyed more than 120,000 buildings and damaged close to a million more.  The cost of the disaster has been estimated at more than 300 billion dollars.

Today 310,000 people are still living in temporary housing.  The anxiety and uncertainty of many of the survivors is clear to see.  People are trying to move on with their lives, but the slow speed of reconstruction has left many feeling trapped and isolated.  Suicide and cases of domestic abuse are also on the rise.

I have been traveling back to Japan on a frequent basis ever since March 11th, 2011.  In this time I have seen and met many inspirational people who despite having lost everything continue to try and move forward. Their stories are often haunting and hard for them to tell. On many occasions I have had tears in my eyes while filming and listening. Covering natural disasters is a difficult thing for any journalist. On one hand you are there to do a job but on another level it is important to be respectful and to understand the people you are interviewing or shooting.

Over these last 2 years I have learnt a lot about how to cover these type of stories. I still cringe every time I see other news crews shoving cameras in peoples faces during the worst moments of their lives. Yes we all go to get good pictures, but there are other ways to do it. Give the people you are dealing with space, respect and take time to listen to their story. It isn’t your story – it is their story. If you remember this you can go a long way to creating a better news report. I often choose to move a distance away and use long zooms when filming people in difficult circumstances. I find that if you give people space and move out of their line of sight you give that person time to reflect and be alone with their thoughts and emotions. Often, standing two meters away right in front of someone is just going to make them uncomfortable and take them out of the moment. By being more like a fly on the wall you allow people to behave and react in more natural way. On this story this exactly what I did. I followed Ryoichi Usuzawa back to the ruins of his house. I left him alone and didn’t direct him, I just observed. I stood behind him and let him forget I was there. Ryoichi does not go back to his house often as it is hard for him to do. This is the exact spot where he came so close to losing his life. His dog Taro was with him at the time and the trauma they both went through still runs deep within them. I stayed quiet as he got lost in the moment. I moved slightly to the side of him but kept well away. By doing this I hope he was able to feel like he was there without a news crew, I got to see a lot more natural response than if I had told him to walk here or there. In these circumstances I find that less is more.

2 Years On from Matthew Allard on Vimeo.

The style I chose to shoot in largely depends on the type of story. Every story should have a common look or flow throughout it. I purposely shot a lot of the footage heavily back lit and with the use of a lot of flare. Ryoichi was there remembering a tragic time in his life and I wanted the shots to reflect this. I also applied this same type of shooting technique when capturing 14 year old Koyuki Iwama playing a flute where her grandfather had died.

I find when filming heartfelt interviews in situations like this it is a good idea to shoot them on a long lens and to also resist the temptation to use reflectors or lights. The reasoning for this is to try and make the person feel as comfortable as possible. Having a bright light or reflector in your face doesn’t make anybody feel comfortable. All the Interviews and shots were done with available light except the Interview with the government spokesman.

I also used a dolly for some subtle movement on a couple of the shots including the stand up.

My second story is about the on going fallout from the Fukushima nuclear disaster. People are still very much feeling the effects and they will be for a very long time. Analysts have said that it may take take 40 years before the Fukushima plant is fully shut down. TEPCO who own the plant say it is running out of space to store contaminated water used to cool the reactors. They are considering dumping it into the ocean.  More than 1,700 people are suing the power plant operator. Mikio Watanabe, a farmer, is just one of them. His story was heartbreaking. Watanabe lives more than 40km northeast from the nuclear power plant but the area where he and his wife lived has been deemed too dangerous to live in. Before the disaster Mikio says his wife was always cheerful, enjoying their life tending to chickens. After the nuclear disaster they had to move to a temporary shelter, and forced to stay indoors. Having lost the life they so enjoyed he says his wife slid into depression. He went on to explain that “the night before she killed herself, she held onto my hands so hard, and refused to let go”. The next morning, Watanabe was outdoors alone, tending to the garden, when he noticed a flame go up by a tree in the front yard. It was only a few hours later that he discovered his wife had set herself on fire.

The Fallout Of Fukushima from Matthew Allard on Vimeo.

It was very difficult listening to his story. We had ventured back to his house where he is allowed to go for a few hours but is not allowed to stay over night. I filmed him inside his house and then he showed us the spot where his wife had committed suicide. Again I chose to shoot most of the shots from a distance as to give him time with his thoughts.

The opening part of the story was shot in a forest in Fukushima that still has very high levels of radiation. It was important to limit our time in this area and shoot it as quickly as possible. We were there quite late in the afternoon and the light was fading fast. With the sun already on the other side of the mountain it created a very high contrast shooting environment. I chose to use this to my advantage. They are measuring high levels of radiation here and I didn’t want it to look like just any other forest. By having a very dark, extremely back lit shot I hoped I was able to encapsulate the feeling that this forest had a darker side to it.  Luckily I was shooting S-log on my Sony F3 so I was able to capture the high dynamic range of the scene with a little more ease.  The interview was done after the other shots and I was quickly running out of light. I resisted the urge to use a light because It would not have cut in well with other shots. For me the theme and mood of the story is more important than making the technical aspects perfect.

I hope I was able to capture and reflect accurately the people’s stories because at the end of the day that is what it is ultimately all about. 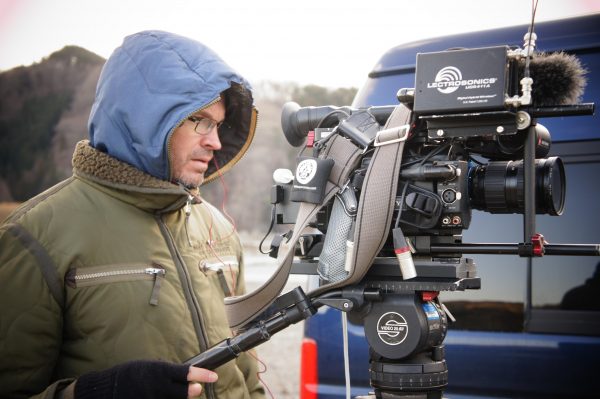