A personal opinion by Micha Hilliard:

2012 saw the release of a number of eagerly awaited digital cinema cameras, heralded by some as “DSLR killers.” These cameras were meant for motion pictures and promised luxuries, such as XLR inputs, super slow motion, and better ergonomics. “No more compromises” was the battle cry of camera manufacturers. Amid the general excitement among filmmakers, many DSLRs have been relegated to b-camera duties or left behind on dusty equipment shelves.

Around this time of year, the impulse is strong to reflect upon what has happened and what is to come. Even better cameras are in the making; 4K resolution will slowly become the norm. Nonetheless, DSLRs are far from dead. For the same reasons that filmmakers once flocked around the Canon 5D mkII, I still gladly choose a DSLR over the digital cinema cameras for a wide range of assignments.

I was recently reminded of my Canon 60D’s qualities out in the Mongolian steppe. My project was to document the way of life of a goat and sheep herder. Getting to his ger [the traditional tent in which Mongolian herders live] proved quite a challenge. The few paved roads on the way were little more than a series of potholes. The rest of the time, the Soviet-era van hurtled across the open grasslands. Having field-tested my 60D in Nepalese and Palestinian local buses, I knew that it was durable and thus I could concentrate on clinging to the door handle. Of course, I was not assured that it would remain in one piece. But keeping in mind the affordability and prevalence of DSLRs, I was willing to take that risk. (When my old DSLR was stolen in the Middle East, I was able to replace the body within a day.)

Once safely arrived at the herder’s home, I set out with him and his clamorous goats and sheep in the direction of the horizon. A herd moves at a relentless pace. By the end of the day, I was exhausted. If my equipment had weighed any more, I probably would not have made it. Thanks to the lightness of DSLRs, very few places are off limits: I’ve been able to steal into railway yards with a graffiti artist and film him from on top of freight cars, dodge sword strokes in the middle of a medieval reenactment battle, and climb down the rusted stairs of a decommissioned missile silo, replete with asbestos and worse. A DSLR strapped around my neck does not hold me back at all.

Back in Mongolia, I was grabbing the last shots of the day as the herder’s family settled down for dinner. On the menu was goat meat soup. At first, the family was tense and suspicious. Within half an hour, they had all but forgotten me. DSLRs put people at ease, since they have the appearance of still cameras. A few weeks ago, I had an assignment to profile a beekeeper who believes that bee stings have healing properties. His living room has become a clinic. By the third day of shooting, I was part of the community: the patients talked and joked with me and paid no attention to the camera in my hands. When traveling, I am usually mistaken as a tourist, even though I am carrying thousands of dollars worth of equipment. This has allowed me to get past Indian army patrols and light-fingered street children in Rwanda.

DSLRs will have a place in my repertoire for years to come. Of course, the lack of XLR inputs and full-HD slow motion can drive a filmmaker mad. If I were to work more on fiction film sets, I would think twice before reaching for a DSLR. The new digital cinema cameras have their clear advantages. However, for someone such as myself, who works mostly in non-fiction and without assistance, DSLRs are still indispensable. 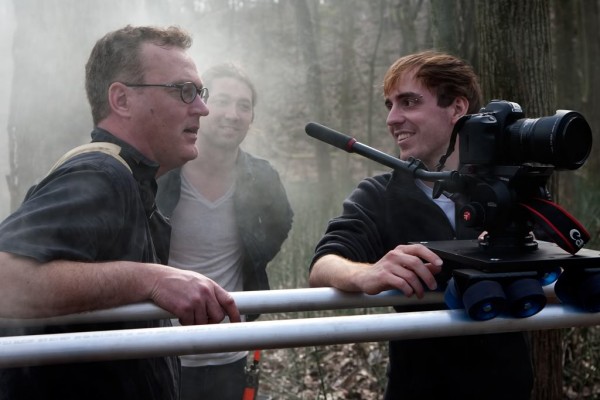 Micha Hilliard is a freelance filmmaker based in Zurich, Switzerland. Visit his personal website here or follow his blog here.