I was hired to help film documentary footage with Coldplay during their UK, North America and European tours this summer by Paul and JA Digital. In total I filmed at 10 different concerts (it’s always fun to walk out in front of 80,000 screaming fans, even if they’re not screaming for you) and documented travelling with the band and some of the different cities they visited. 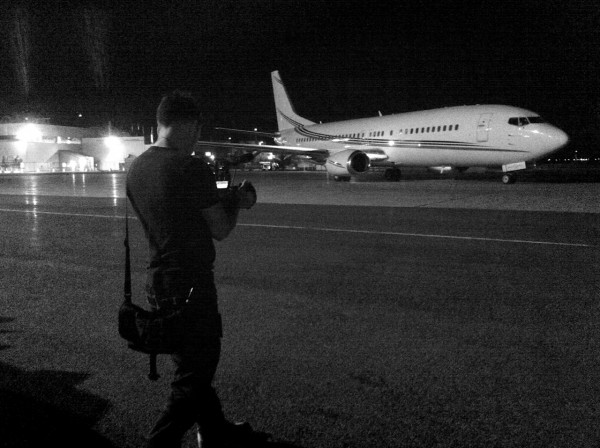 I’ve been working as a director and editor for over twelve years and have got behind the camera at various times. I was lucky to start shooting music videos on film but this quickly turned into digital. HD-DSLR cameras certainly enthused me to get behind the camera more and in the last four years I’ve balanced my time between either being out on shoots or back in the studio editing and grading.

I looked at a number of different camera formats and even did side-by-side tests before I decided upon using the Sony FS100 and FS700 as my principal cameras for the tour. My decision was based on a combination of image quality and practicalities. The directive was to film everything at 50fps (or higher as with the FS700) hence the 1080p images from the Sony cameras for me far surpassed the images other cameras would deliver when limited to 50fps at 720p. The FS100 and FS700 are also both very good in low light, have good dynamic range and a very clean image. As for practicalities, both cameras are light and portable, have great battery life, easy recording media to shoot all day and backup quickly afterwards and the cameras are also very modular. I could strip the FS100 down to have on a Merlin Steadicam or built the FS700 up with an extra SmallHD DP4 and shoot handheld in the crowd with a 70-300mm lens. I like cameras which are this portable but also offer this amount of flexibility.

The inclusion of the FS700 really heightened the live footage I was able to film using the 200fps capabilities of the camera. Coldplay’s shows have so much visual impact that being able to capture Chris Martin’s performance amidst a sea of confetti at 200fps really added an extra level of depth to the documentary.

Everything was filmed using the internal AVCHD codec. I found that the confetti shots certainly stressed the codec the most and I kept looking for different options for recording externally, but almost all the options required filming interlaced to the external recorders and not progressive. I was very impressed that the AVCHD codec held up so well as concerts are very demanding shooting situations, but it just goes to show that people shouldn’t be influenced by the numbers as I found that 24 Mb/s look much better than higher bit rates off other cameras.

The FS700’s burst mode was tricky to time as you have to pick your 10 seconds of recording time carefully, as after each take the camera would take a couple of minutes to cache the 200 frames to card and reset before it was ready to record again. I found that within a standard length song this gave me about 2 shots I could record per song. I always opted to use the ‘end trigger’ mode so that if I saw something amazing, I had to just count backwards from the moment it started till I reached 10 so that hopefully the shot would have played out but without me missing the start of it. The frustrations came when something stunning would then happen the moment I hit record to capturing the previous clip, as at that point there was nothing I could do but wait for 2mins for the camera to reset. Fortunately I filmed across 5 shows by the time I had the FS700 and so I knew exactly at what point in the set each great performance moment from the band would happen. I had the setlist on my iPhone and would remember to get into the right place to get the shots of Chris Martin jumping, or guitars being thrown etc.

I also used a Sony NEX-5N as my b-cam for time-lapse and filming in situations when a bigger camera would have attracted too much attention such as at airport, on planes and sometimes backstage. As portable and light as the FS100 and FS700 are, they are still very obviously video cameras and it’s hard to convince someone you’re not filming with one when you have it in your hand. The Sony NEX-5N is my favourite little B-cam as it takes all the same lenses as my A-cams, shoots to AVCHD as well but is tiny. The images out of the camera can be stunning and sometimes indistinguishable from the A-cams and using the NEX-5N allowed me to document moments when it would have been inappropriate to pull out a bigger camera.

Simply put, the bigger the camera the more obvious it is that you are filming and as people are very aware of the camera their behaviour changes. This is not unique to filming bands. A smaller camera size can allow you to get a more intimate documentation of a situation. When a band has just come off stage to 80,000 people they might want a little solitude and peace when travelling back to their hotel. Filming these situations requires respect and consideration and using smaller cameras is always much less intrusive. Some of the most candid and honest backstage moments occurred when I filmed with this camera.

I always had a day sheet of where, when and what the band would be doing to help with planning each day, but on top of this I’d worked closely with the director Paul Dugdale and had drawn up a big spreadsheet of shots which I put into shot lists for each day. I like to pre-plan and prepare as much as possible and although I had a lot of opportunities to film across many different concerts, I also had very specific shots I needed to film and sometimes only a single opportunity to get them. We had a jigsaw of narrative shots which needed to be captured in different places and at different times to then slot into the five themed documentary sections of the final film.

In terms of gear, I tried to balance having everything I’d need with not slowing myself down with too much stuff. I have a great shoulder rig system but made a decision early on not to bother taking it as although it would be good to use during the concerts, it would make the camera size too big for filming backstage or in the cars or planes afterwards. Mobility is incredibly important when you are travelling with the band and filming them at the same time. Even practical things like only having one hand free to operate a camera whilst walking to a plane suddenly means that without autofocus you have no means to hold the camera and change focus at the same time. All these considerations are something which you often don’t realise until you’re in the situation and trying to get the shot… but without being left behind at the same time.

I have a Think Tank Airport International as my main camera bag which contains all my lenses – a mix of Canon, Tokina and Nikon all fitted to EF and also native E-mount lenses by Sony and SLR Magic. This bag also contains my batteries (a Hawkwoods system which uses Sony NPFs with a breakout to power my DP4), Sony FS100 and Sony FS700 and other accessories such as leads and media. I then keep a second Think Tank shoulder bag with me at all times with a little Sony NEX 5N, any other lenses, laptop, hard drives etc. This bag always travels with me in my hand so at any point I can pull out a camera and film something as I see it. Lastly I take a very small Manfrotto tripod, Glidetrack and Steadicam Merlin and a handful of clothes in a tripod bag. I used to have much bigger tripods but I found that when working solo, I would be too tempted to leave the tripod behind due to the weight and the inconvenience of lugging it around. Filming stadium and arena shows requires a lot of running around so I’m always keen to shed any extra weight so that I can get from A to B quicker and get more shots.

My favourite accessory with the Sony cameras is without doubt my Metabones EF-NEX Mount adapters. Without them my Canon glass would have no iris control or IS support and this would have made a huge difference to the way I would have filmed on the road. I really rely on going totally handheld and working with IS lenses for stability.

Fortunately for me on this tour, I didn’t have to worry about recording any audio as the filming I was doing was all to be in slow motion and with no camera sound. I was lucky to just be thinking about the images. That said, I always carried a small portable Tascam recorder with me just in case. 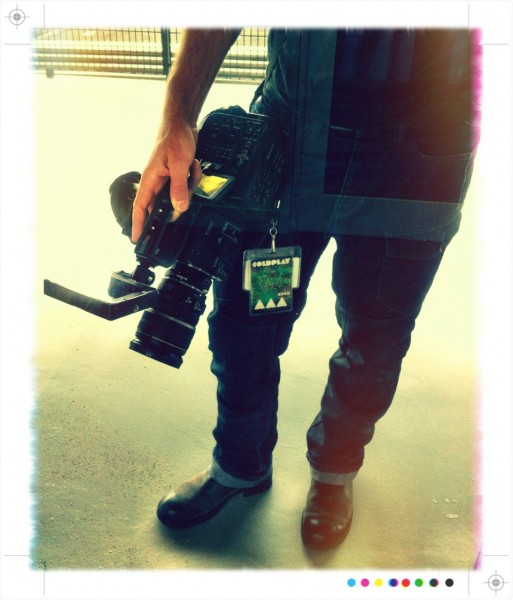 My advice to aspiring documentary and music shooters would be that nothing beats getting experience by going out and just filming a lot. There are so many young unsigned bands all desperate for video content that there’s never a lack of content to film. I got on my first tour bus about 10 years ago with a Canon XM1 shooting miniDV and loved every moment of the experience. I would always ask myself, what’s the best shots I can get here and what’s the narrative I’m trying to tell and this approach transcends camera formats and what gear you’re using as it’s all about walking away with a story at the end of the day.

You certainly need to be proficient with your gear and understanding good framing, focus, exposure and lighting are all skills that can be easily taught and then applied. The best gear in the world won’t help if the shot is out of focus. Resources like fstopacademy run by Den Lennie are a quick start into learning these skills and also for picking up great tips and tricks along the way.

You can find more about James and his work on his website.