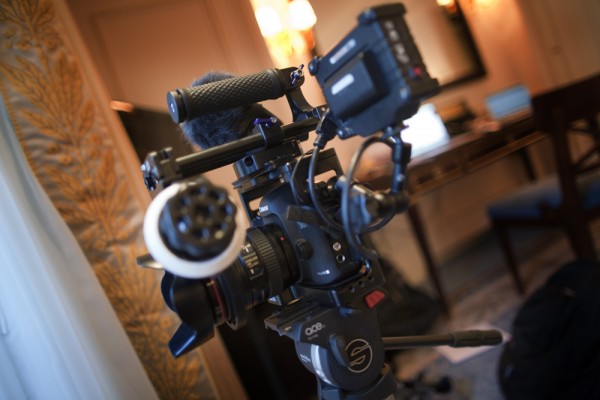 As a group, photographers and filmmakers might spend more time thinking about the gear we use to do our job than almost any other profession. Every single job has a specific set of tools which will be the most effective for that job. Having the wrong tools can result in uncomfortable days and poor results. I try to stay away from mediocrity – there’s too much competition for that. It isn’t rocket science, but anything I can do to make my job easier and in turn produce better results, I do.

Before I go to a shoot there’s always this seemingly silly, but often anxious, thought process in trying to decide what I should bring and how I should bring it. Which camera, which lenses, which microphones, which stabilization devices, etc. But the questions don’t stop there. How many bags does it require to bring the X amount of gear, previously decided on? How many of those bags can I hold without killing myself? If there’s a lot of bags, how many people does it take to carry them? Is the car big enough for a Pelican case six feet long? How do we get the tripods on the plane? Does that rig break down? Can we rent it there? And so on…

The questions build and over time the answers to those questions result in owning a lot of gear. This is necessary in order to do the best possible job in every possible scenario. However, in my arsenal of gear, certain products are becoming more universally relevant regardless of what I happen to be shooting. These products often have a huge impact on my life and in many ways — make life a little easier. Over the coming months I want to dedicate some space and time to thoughts to products who I feel are currently making my life a little better.

The first of these products is the Sachtler Ace M tripod.

Coming from a still photography background, I owned a lot of tripods before I moved into the video world. And for the first year or so, those tripods worked ok.

However, over time as my ambition grew so did my need for proper video tripods. I wanted fluid movements and a ball levelling head. But none of my cameras or rigs were actually so big that they warranted the large tripods I was using.

For example, in this photo I’m using a jib with a fairly heavy tripod — but throughout the day I was using the tripod with a DSLR on it. The tripod probably weighed around 8-10 kg (it needed to be big enough to carry a 4 meter jib). For cameramen with bigger payloads, this is necessary. However, as a DSLR shooter it was a bit too much overkill, even if my camera was completely rigged up.

For a while I felt a bit stuck. I had to make the decision to either have a tripod that was too big or one that didn’t perform well enough. While it might be easy to say — simply take the one that’s too big, if you’re the person carrying that tripod around and you have a lot of air travel involved, this isn’t always the best option.

Then, I was approached by Sachtler — an established German company making tripods outside of Munich. They told me about a new product called the Ace System — a tripod system made for DSLR or small HDV camcorders. They claimed the system would be light weight, but perform with functionality and ability of a much larger tripod. This summer I tested their claim working on the road in Mongolia, Italy and France.

A Changing Landscape from Jonah Kessel on Vimeo.

On all of these assignments, I consciously tried to push the tripod, shooting on uneven surfaces, small spaces and experimenting with the friction controls. The result of me pushing this tripod was quite a bit of pan and tilt movement throughout the videos. You can see the results above and below. But from the user side, I thought it was fantastic.

For DSLR shooters who travel a lot, often without big budgets, this tripod fits like a tailored suit.

One thing similar about all of these assignments: we had to move locations throughout the day, everyday. There was a schedule, but no shot list in terms of shooting. This meant I was frequently packing up my bags and unpacking them. In Paris, Italy and Mongolia, I was also on foot a tremendous amount of the time.

These are all attributes I would normally try to avoid: not planning, no shot list, frequent location changes … actually it sounds like a bit of a filming nightmare.

In these scenarios the Ace was perfect. It gave me enough support to have a my rig on it with fluid control, but it wasn’t so big that it weighed me down. While my setup changed slightly from place to place, I was shooting with the Ace combined with a Canon 5D mkIII and Shane Hubert’s Master Cinema Series ManCam from Letus Direct. I used a full set of Canon glass with the heaviest lens being a 70-200mm f2.8L USM. The cage also often had audio gear and external monitors on it.

A Stranger in Paris from Jonah Kessel on Vimeo.

As far as the construction of the tripod goes the Ace system has a counterbalance dial as well as a 3-point drag controls for vertical and horizontal movements. At stage 3 on the drag control, the movement is fairly resistant and gives you the ability to easily follow a moving person or object. The system also is equipped with locking levers for vertical or horizontal movement.

The tripod weighs in at 4.4 kg (roughly 9 lb) with the fluid head weighing 1.7 kg (3.7 lb). This is great for air travel, when other tripods of similar ability can take up a high percentage of your checked baggage limits. The tripod itself is built from a lightweight aluminum while the fluid head built from a fiberglass reinforced composite. Sachtler recently announced a new version of the tripod called the Ace L will soon be offered with carbon fibre legs.

Furthermore, while the tripod is good for lower payloads, if you are shooting on a Canon C300, Sony F3 or larger traditional camera this probably isn’t the right tripod for you. The manufacturer says it maxes out at 8.8 lb (4 kg). For solo shooters with DSLRs and smaller video cameras this product is fantastic.

One of my big questions was how it would cope with constant traveling. After going in and out of six different countries with it this summer it is still functioning as it did when it was new.

And the real kicker is — the price.

Its cheap. I might even call it — real cheap. The head and tripod come together and are priced at $550 from B & H Photo. There’s simply not so many (if any) options that function this well in this price range.

For me, this is the right equation. The right balance between size, weight, functionality and price.

In short, this product is making my life a little better.

DISCLAIMER: Sachtler supplied me with this tripod for user feedback. However, I was not required to write this review, and was free to voice my own opinionns.

— Jonah M. Kessel is a freelance visual journalist based in Beijing, working with the New York Times. See his web site here, blog here or follow him on Twitter here.