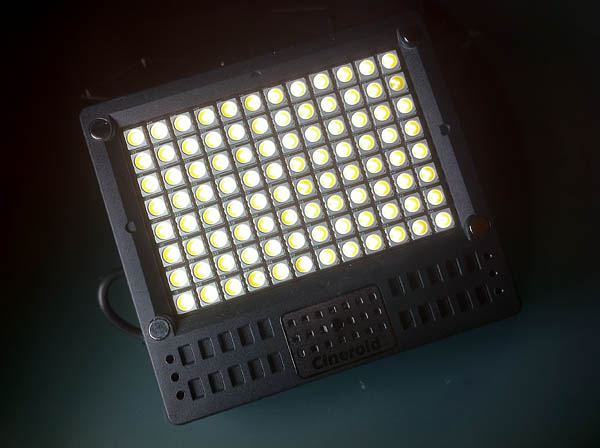 I’ve been testing out the new Cineroid L10C-5K LED light for the past few weeks and have been very impressed with it. It’s an amazingly compact yet extremely powerful LED light designed for on camera use.

Compared to my other LED on camera lights the L10C is quite a bit brighter. Normally I use either I Litepanels MicroPro or the inexpensive F&V light Z96. The Cineroid beats them both for brightness and yet is quite a bit smaller.

The light comes in 2 versions, to 5400K daylight version that I tested and the L10C-3K version which is 3000K tungsten. Both lights are fully dimmable in 30 steps and has a display on the back showing the value. In terms of colour accuracy I don’t have access to a colour meter and so was unable to do scientific tests. To my eye the Cineroid is pretty white and it looks pretty good on camera. Beam spread is a claimed 120 degrees and is certainly wider than the Litepanels MicroPro or Z96.

To give you a better idea of how these lights compare I’ve shot the simple test below to show the brightness and coverage of the three competing LED lights. The Litepanels MicroPro, The F&V light Z96 and the Cineroid L10C-5K were used to light the same shot one after the other – no settings were changed between takes. (The camera used was a Panasonic AF101 using a Tokina 11-16mm lens set at 15mm with an f2.8 aperture. White balance was set at a constant 5600K.) All three lights had fresh batteries and no diffusers fitted.

The L10C-5K has an optional protective clear filter that attaches via magnets. This can be changed for the included honeycomb filter. I found that the filters came off all the time in my bag as the magnets were not strong enough. Without the filter the LEDs are exposed to the outside world and I’m not sure how well they would handle the wet. This is the light’s biggest failing but for me it wasn’t a deal breaker – I am looking at other ways to keep it dry.

The light is powered from a Sony style battery from a plate on the rear of the light. You can buy an $39 PA-01 adapter which converts this plate so you can use Canon LP-E6 batteries from the 5DmkII if you want to travel light. You can also power the light from a DC source such as the D-tap connector on a broadcast battery but you will need to buy an additional cable. Runtime with a LP-E6 was around 30 minutes at full output but when the Canon battery does get too low the light tends to flicker rather than just stop working – something to watch for on a shoot. For longer runtimes I would recommend a larger Sony fit battery instead.

Unlike most LED camera lights the L10C-5K runs a hot after a time, probably because of it’s extremely high light output. The small heatsink at the top of the unit is scalding hot after prolonged use and the rest of the case gets pretty warm too. I would advise careful use and placement of the light to account for the heat.

The light is supplied with a mini ball and socket mount which allows you mount it on top of a DSLR or video camera – although this is seldom the best place for it. I fitted my light with an MA-T03 arm from Tilta that can attach to rails or screw into a regular 1/4 20 hole.

The light can also be controlled wirelessly using an IR optional controller. I didn’t buy one of these and so couldn’t test this function. 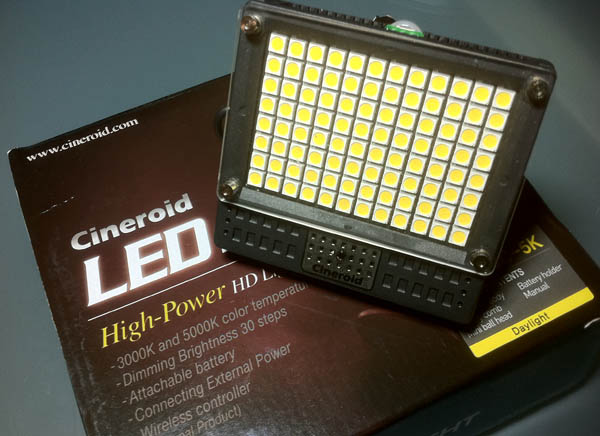 For now the Cineroid LED has earned a place in my kit bag. It is so small I can carry it everywhere and so bright that on many assignments I wouldn’t need to carry a larger Litepanel. You could build a small kit out of several L10C lights that would fit in a small bag and be able to light indoor interviews. For run and gun solo filming it should certainly be on your list of lights to look at.