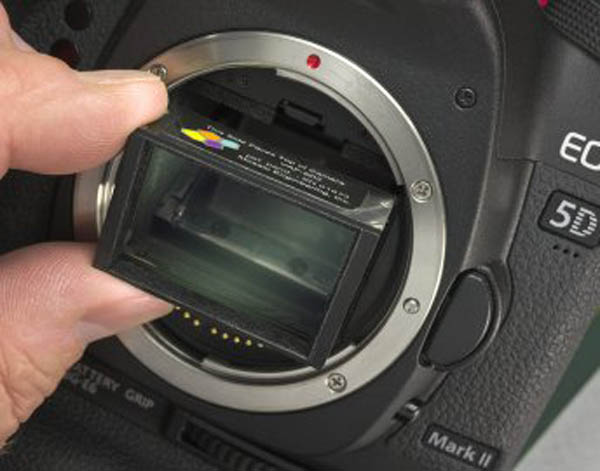 DSLR video guru Phil Bloom has been lucky enough to get his hands on the new VAF-5D2 anti-aliasing filter which potentially solves one of the biggest image quality issues with the Canon 5DMkII.

Aliasing creates the infamous moire pattern where false colour information is seen in an image and is caused by the way the camera downsizes the video image from it’s 25MP stills sensor to the much smaller 1080P image. It is often seen on brick walls or textured fine fabrics. Up until now the only way to avoid this has been to carefully shoot shots so the effect doesn’t seem obvious (ie no brick walls or women wearing silk scarves) or try to fix the problem using software in post production – neither technique is really suited to news and documentary production.

The Mosaic Engineering filter is a physical filter solution that effectively removes the excess bits of the signal that causes the aliasing in the 1080P image. In essence it slightly blurs the image just enough that the camera can still get a clear 1080P image. It appears to help with moire and also ‘stair stepping’ where straight lines like telegraph wires appear jagged in video. Most digital stills cameras (including the 5DmkII) already have one anti-aliasing filter fitted on the front of the image sensor but it is optimized for stills shooting and does nothing to help with video shooting – the Mosaic Engineering one is optimized for video. Have a look at Phil’s video test below.

Phil does note that the filter doesn’t work well on very wide angle images where there is corner blurring. He also notes that the image is slightly softened and that the lens does not remain parfocal (ie focus shifts as you move through the zoom range). There may also be issues with older lenses like Nikon manual focus ones where there are metal parts and levers that protrude from the rear of the lens – these may hit the anti-aliasing filter or get stuck.

At the moment this filter only works with the 5DmkII and there is no confirmation of versions for other Canon cameras like the 7D or 60D. Price is set at US $385.

Cinematographer Glenn Przyborski has been working with Mosaic engineering to create and test the filter. You can see some of his sample videos here:

You can order the filter and find out more on the Mosaic Engineering website.
You can see Phil’s full report here.