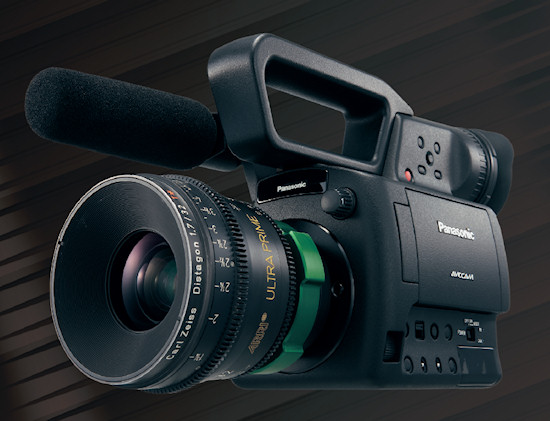 There has been a lot of hype online recently over the impending release of Panasonic’s new AG-AF100 micro 4/3 camcorder. From my perspective as a broadcast cameraman Panasonic calling it a professional camera is a bit of a stretch. It is hardly in the same class as proper professional cameras like the RED One and the Arri Alexa. I have used just about every camera you can think of through out my career (BVU, Betacam, Betacam SP, SX, Digibeta, P2, XDCAM, EX, Z1 and so on) and i’m always interested to try out anything that is new. Almost every camera no matter how cheap or expensive it is has good and bad points. In the end its the user who frames the picture, chooses the settings and hits record, not the camera. Knowing the limitations and how to use your camera is the key to capturing great footage.

So what about the Panasonic AG-AF100. The image quality is recorded at 24Mb/s, it has two XLR inputs featuring 48-kHz/16-bit two-channel digital audio recording and supports LPCM/Dolby-AC3, it also has USB 2.0, HD-SDI and HDMI outputs, a built-in stereo mic and time code recording. To someone who has been shooting with the new generation of DSLR’s these all sound like the features everybody has been calling for. What you have to remember is this is a video camera, it’s not a stills camera that can shoot video, nor is it a video camera that can take photos…..it is a VIDEO camera. For those expecting an image quality that is on par with a 7D or 5D think again. A 4/3″ sensor is a lot smaller than that of a 7D or 5DmkII. The reason a 7D looks better than a 550D and the reason a 5DmkII looks better than 7D is due to the size of the sensor.  What this boils down to is the bigger the sensor the more information the camera is looking at regardless of the compression. As we all know the larger the sensor the shallow the depth of field. To get lovely shallow DOF you will need incredibly fast glass on the AG-AF100. It will certainly have its own unique look.  Having said that the AG-AF100 seems to have lower noise levels at higher ISO’s (better than a 7D but probably not as good as a 5DmkII or 1DmkIV). Even with this all said it is an exciting time in the industry with a lot of new cameras and different companies joining the mix which can only be good for the end user.

While the AG-AF100 seems capable of capturing very nice pictures, the 24Mb/s AVCHD codec is still about the same as Sony’s recently launched NEX-VG10 consumer camcorder which actually has a larger sensor than the Panasonic (about the same as the 7D). What you also have to remember is the 4/3 system has a 2x crop factor. There are a few 4/3 inch wide lenses but if you throw on a Canon 16-35mm f2.8 it will quickly become 32-70mm, just something to keep in mind.

I have had a chance to play with the Sony and to be honest it didn’t impress me that much. The lack of progressive recording (although it is actually recording 1080p wrapped it into a 1080i container), poor audio imputs and rather cheap build quality were a let down. On the positive side it was rather easy to use and the image quality wasn’t too bad.

Of course the Sony camera is only $2000US while the Panasonic AG-AF100 is $5000US. Why the big difference in price? Well the Panasonic is fully Progressive, has variable frame rates, proper XLR inputs and full HDMI out and HDSDI out. For those who may not know what HDSDI is; SDI stands for Serial Digital Interface. It is basically the professional TV industry standard for transfer of HD material. It is normally only found in professional equipment. So why is this a good thing on a $5000 camcorder? Well it enables you to take the very best image available from your camera by sending an uncompressed output to be recorded by a HDSDI recorder like the Convergent Design Nanoflash or Aja KiPro at much higher bitrates. Instead of recording internally on the camera at 24Mb/s you can record it as high as 280Mb/s on the Nano Flash. In plain English this means you can record the vision at more than 10 times the bit rate that the internal codec does in the camera. This makes a huge difference to the image quality but it comes at a cost. Your $5000 camera just became a $8000 camera with the addition of a Nano flash. This is an interesting camera and is capable of producing very nice images at a high bit rate (with addition on a 3rd party recorder). With proper audio, viewfinder, no record time limits and far less rolling shutter and moire there are a lot of things to like. There is a reasonable selection of pretty good lenses and lots of adaptors to enable you to run Leica, Nikon and Zeiss lenses. There are also adapters for Canon EF mount but they don’t have an electronic connection to the Panasonic mount so you would be stuck with a fixed aperture (eg. a Canon 16-35mm f2.8 lens when used on this camera would be locked at f2.8). There are to my knowledge a couple of manufacturers working on an electronic adaptor mount that will fix this problem.

Who can I see buying this camera? This is an interesting question. I have no doubt they will sell like hotcakes. For people who are not getting paid to shoot, $5000US is a lot of money to spend on a camera and if you want to record at the higher bit rates you will be forking out more like $8000US. This camera I imagine will become very popular with indie film makers who maybe once used a EX-1 or Sony Z1 with 35mm adapters like the Letus Ultimate. There will also be a lot of people who will run out and buy this camera just because they can and because its the first camera to come out with all the features that HDDSLR owners are craving. This camera is certainly not the death of the HDDSLR and I’m sure there will be plenty of similar products coming out in the next 12 months. The question as to whether you buy this camera comes down to what you need your camera to do and what your budget is. It is very important to remember this is a video camera not a DSLR and you should look at it in this way.

Be very careful watching videos that have been put up on the web from this camera as you don’t know in some cases whether the vision was reordered at 24Mb/s a second or 280Mb/s. Some videos will tell you what bit rate they used but others won’t. Doing your research online is a good start when buying anything but the only way to judge a camera is to physically go and look at it, play with it and make your own conclusions. Would I buy one? The jury is still out. I’m holding out at the moment for something more high end.

About Matthew Allard, Aljazeera Senior Field Cameraman, Kuala Lumpur:
Matt has been a Camera/Editor in TV news for 20 years, previously working for both Channel 9 and Channel 10 in Australia. Twice Network Ten Australia’s cameraman of the year as well as being a Walkley Finalist for outstanding camerawork in 2006 (for coverage of the Cronulla Race Riots) and a Logie Finalist for outstanding news coverage 2006 (Bali 9). He has covered news events in more than 30 countries, from major sporting events to terrorist bombings. Based out of the Kuala Lumpur broadcast centre in Malaysia he is an avid user and follower of new technology, shooting stories on HD broadcast cameras as well as new Canon DSLR’s.