The Sword Maker & The Swordsman from Matthew Allard on Vimeo.

I bought a Canon 7D in Seoul during a work trip to South Korea last year. I have always been interested in trying new equipment and techniques to capture images. Previously to get the film look required an expensive film camera or buying something like a Letus 35mm adapter setup for a broadcast camera. Either way was very expensive and out of reach for most of us.

At Aljazeera we shoot on Sony XDCAM HD and while being a pretty good camera it gets let down with poor dynamic range, sharpness issues and bad depth of field. Working for a 24 hour Global news network the camera is great for the fast turn around of breaking news stories. Currently the work flow of a using a DSLR camera is not quick enough in most cases to meet these requirements. There are the problems with audio, transcoding, lack of full HDMI out and not being able to use a fluent zoom lens, these issues would probably most TV news networks away from wanting to use them. I have found working at Aljazeera that i have had quite a bit of freedom to try new cameras and ways of doing things. There are always conservative factions in most media organisations that don’t like anything new or different, but Aljazeera has been very supportive. Asia Correspondent Steve Chao has been fantastic and shown great patience in letting me use the 7D on certain stories, knowing full well that it takes a lot longer to shoot with than using our regular TV equipment. Aljazeera has been very pleased with the results and i hope that more people will follow my example and start using this sort of technology.

Recently Correspondent Steve Chao and I went to Taiwan to do a few stories and one of them was in Cheding in the south of Taiwan. It was a story on the dying tradition of sword making. Kuo Chang Shi has been a sword maker for more than 50 years and is the man who made the Green Destiny sword that featured in the the Oscar winning movie Crouching Tiger, Hidden Dragon. I decided to shoot it on the 7D because it suited the old, poorly lit workshop he was in and he would be dealing with fire so I would have to shoot in high contrast conditions. Anyone who has used an XDCAM will tell you that they are terrible in low light and cannot reproduce high dynamic range scenes.

I shot with the 7D in 720p/50fps. I did this for two reasons: I wanted to slow a lot of the material down to 25fps and it tends to work better if you are using it with any XDCAM vision. Our work cameras only shoot 50i (35mb/s) so when you shoot in 25p it doesn’t tend to blend in very well.

I initially had the idea to go to a temple to get some mood shots. This story was about old world traditions and customs. The incense burning and people praying would make a great introduction to the story. I didn’t set up much with the sword maker as what he does is very repetitive. I tend to prefer to let people do what they normally do and work around them. This way you get a more fluid natural look to your story. The shoot took about 4-5 hours to do. I was lucky enough to have one of the worlds top Tai Chi experts turn up to get his swords sharpened while we were filming. We politely asked him to demonstrate some moves for us which again looked great when slowed from 50fps to 25fps. I still record my audio on my broadcast cameras as I’m still waiting for either a Magic Lantern firmware upgrade or the new Juicelink system that is is pre production.

Once I’d finished the story I then imported the shots onto an external hard drive, then used MPEG Streamclip to convert them into Apple ProRes 422. There is a catch with doing this though, the file sizes created are enormous and you have to own a huge external hard drive. If I’m mixing 7D with other footage I usually convert them to XDCAM 1080i50 (35mbs) as that is the format my broadcast camera records in. The file sizes are a lot smaller when you do this however they take a lot longer to convert than turning them into ProRes 422. The advantage of doing this is that I don’t have to render the material if i’m dropping it onto a XDCAM timeline in FCP. Because this story was shot solely on a 7D I turned them into ProRes 422 and created a 720p/50fps timeline. I also turned most of my material from 50fps to 25fps using Cinema Tools so I had nice slow motion footage. I did this because I wanted to emphasise every little detail from the drifting of the smoke to the tiny bits of metal and sparks coming off the steel.

The whole edit took about 7-8 hours to do as I spent a lot of time fiddling with it and making slight adjustments – I was running five tracks of audio. I didn’t use any grading tool like Magic Bullet Looks and the camera was simply on the Standard setting. Once completed I had to export it as a Quicktime file and then bring it back into FCP. The reason for this was I had to turn it into an XDCAM sequence to be able to play out off the timeline through a Matrox MXO box than converts the signal into an HDSDI so i could record it onto an XDCAM F70 machine. I wish i could create a ProRes timeline and play it out as ProRes, but the approximately four year old work issued 17″ Macbook Pro cannot play a ProRes timeline out. Hopefully in the future I’ll be able to cut and output in ProRes because the quality is a lot better if you do it that way.

I’ve used the 7D for about 3 months now and am still getting used to it. I have a few basic items for it including a Genus mattebox and adaptor plate that lets me put the camera straight on my professional Sachtler 18P tripod. I still don’t have a viewfinder (although I just ordered a Zacuto Z-Finder) or anything for audio. I make do with the lights, audio and other equipment from my regular broadcast kit. I own a Canon 50mm f1.2 and a 16-35mm f2.8 and I hope to get a 70-200 eventually.

Overall I was happy with the result of the story. There are a lot of situations that i can think of, especially in news, where this camera would be useless for shooting with. That said it is certainly is a useful addition to my kit and something I will continue to use in the future. 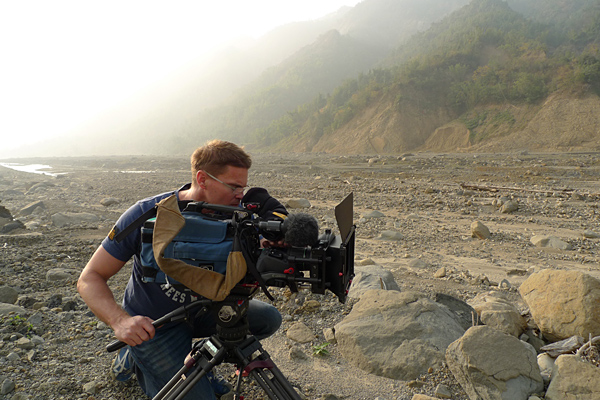 About Matthew Allard, Aljazeera Senior Field Cameraman, Kuala Lumpur:
Matt has been a Camera/Editor in TV news for 20 years, previously working for both Channel 9 and Channel 10 in Australia. Twice Network Ten Australia’s cameraman of the year as well as being a Walkley Finalist for outstanding camerawork in 2006 (for coverage of the Cronulla Race Riots) and a Logie Finalist for outstanding news coverage 2006 (Bali 9). He has covered news events in more than 30 countries, from major sporting events to terrorist bombings. Based out of the Kuala Lumpur broadcast centre in Malaysia he is an avid user and follower of new technology, shooting stories on HD broadcast cameras as well as new Canon DSLR’s.